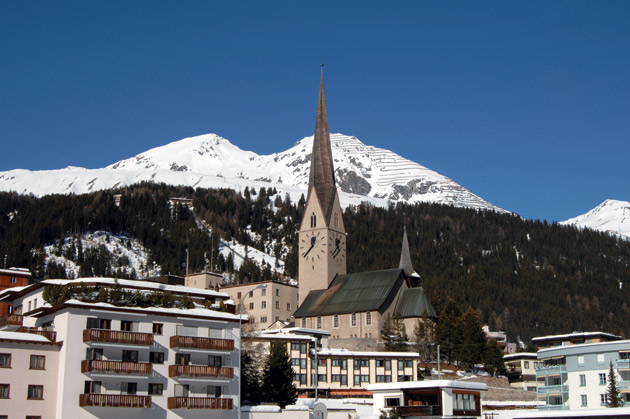 Time has called it a gathering that is "coated with a distasteful glaze of elitism," while MarketWatch called it "an ego trip for the 1%" and "a place to reinforce the political opinions of the haves and have nots." The annual World Economic Forum (WEF) in Davos, Switzerland, has indeed suffered a reputation setback. Some see it as merely a place where the world's richest gather to show off their ski skills and spend their evenings networking at expensive dinners and glamorous parties.

But that does not mean that these world leaders, business tycoons, NGO reps and just-plain-rich people did not spend much of their time in Davos talking and thinking about how to, essentially, make the world a better place. This year, from January 25 to 29, they came together to discuss economic policy, environmental dangers, food safety and cybersecurity, to name a few topics.

A report released ahead of the meeting listed severe income disparity and chronic fiscal imbalances as the top two risks facing business leaders and policy makers today and into the next decade. It also references a "dystopian future for much of humanity" if these problems are not addressed.

But is the World Economic Forum really an answer to global problems? One of its mottos is "committed to improving the state of the world," while another proclaims "entrepreneurship is in the global public interest." These presumptuous slogans lay the groundwork for the public's unrealistic expectations of the Davos elite, many of whom, ironically, helped cause the Great Recession.

And though the nonprofit foundation does invite entrepreneurs from around the world, whether or not what is discussed is in the interest of the global public is up for debate. Started in 1971 as the European Management Forum, the gathering has become one of the most recognized conferences in the world. It has also become one of the most protested annual events.

Beyond the ties to the 1% and those who played a part in the recent financial crisis, the forum has also been criticized for its lack of female representatives. This year, just 17% of the roughly 2,500 delegates were female. Helen Clark, the former prime minister of New Zealand and current administrator of the United Nations, has called the World Economic Forum's female participation "pathetic."

The forum's organizers do deserve credit, however. They put a quota system into place in 2011 to increase female attendance and panels addressing the benefits of mixed gender and race in the boardroom have become commonplace at the event. The founder of the WEF, Klaus Schwab, has even proclaimed that "a world where women make up less than 20% of the global decision makers is a world that is missing a huge opportunity for growth and ignoring an untapped reservoir of potential." Even with more support now and more female attendees than ever before, gender equality is far from a reality in Davos.

There is no doubt the WEF has achieved much to make the world a better place, but the untapped opportunities in Davos are vast. Perhaps the biggest argument against the meeting of the minds that is the World Economic Forum is the concept of the "bell jar," as Hernando de Soto Polar, president of the Institute for Liberty and Democracy, termed it. Although aware of the world's problems, each country's elite live in a bell jar, remaining out of touch and, at times, even oblivious to the hardships, issues and fate of their fellow citizens. Are they the best choice?

It is ironic that those who reside in this bubble of sorts were unable to see the last one coming. In addition to the world's top economists, policymakers and business people, perhaps what Davos needs is a few good risk managers.
Emily Holbrook is the founder of Red Label Writing, LLC, a writing, editing and content strategy firm catering to insurance and risk management businesses and publications, and a former editor of Risk Management.