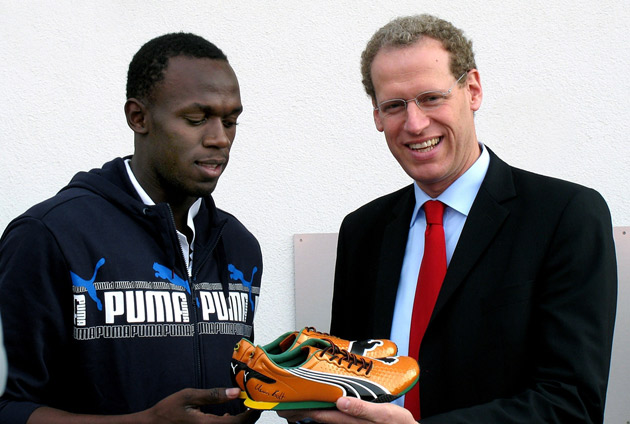 Usain Bolt, in 2009, during the dedication ceremony of the new headquarters for Puma, a company he was unable to promote during the London Olympics, despite the $9 million the shoemaker reportedly pays Bolt each year.[/caption]

Michael Jordan had just won a gold medal. And with the Olympic Games over, the world’s best basketball player was in the locker room looking for an American flag. It wasn’t about patriotism. As he prepared to climb to the top of the podium to receive his medal and listen to his country’s national anthem, Jordan was thinking about his brand.

The year was 1992 and the setting was Barcelona, Spain. The Dream Team had destroyed all challengers in the men’s Olympic basketball tournament and the focus had shifted to Air Jordan—the sneaker, not the man. The Nike-made shoe had become a fashion icon, but now the United States Olympic Committee wanted Michael to stand on the podium wearing a tracksuit made by Reebok, the official sponsor of Team USA and Nike’s chief rival.

Jordan, and several other members of the Dream Team, weren’t having it. Charles Barkley, the team’s bombastic power forward and fellow Nike client, captured the anti-Reebok sentiment most succinctly. “I got two million reasons not to wear that shit,” said Barkley, as quoted in the new book Dream Team by legendary sportswriter Jack McCallum.

Thus, the search for flags. That was the player-created solution: wear a flag over their shoulder to cover up the Reebok logo. So out came Jordan, Barkley and Magic Johnson, draped in Old Glory. Several other members of the team likely would have followed suit, but as McCallum writes, “only three flags had been procured from spectators.”

At the time, almost nobody noticed. The sports reporters following the team knew, but to everyone else, the flag-clad players likely just looked patriotic. “As with most issues related to money,” writes McCallum, “nobody cared except the people involved.” 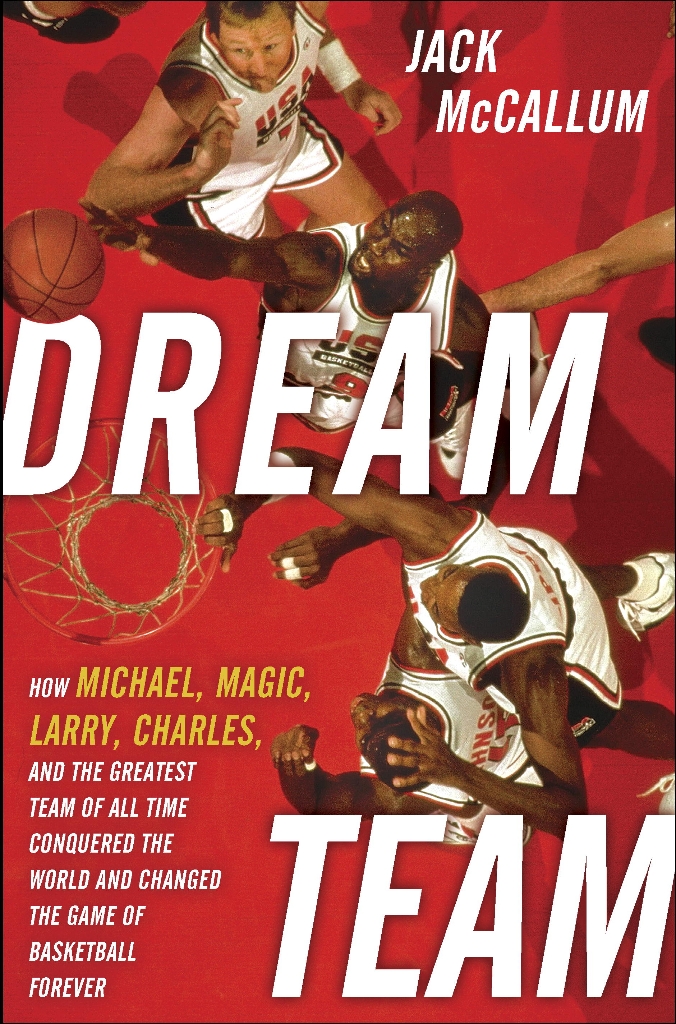 “As with most issues related to money, nobody cared except the people involved,” writes McCallum about the initial reaction to the Dream Team podium ceremony controversy.[/caption]

But the press soon began to report on the issue, which can be seen as the precursor to the sponsor-related firestorm that played out last month in London. The athlete branding world has exploded since the Dream Team, with U.S. swimmer Michael Phelps and Jamaican sprinter Usain Bolt leading the way. According to Forbes, Phelps earned $7 million from sponsors, including Subway and Under Armour, in the 12 months leading up to the London games while Bolt reportedly topped that lofty sum with just his $9 million-per-year Puma deal.

But much like Nike’s inability to garner promotion from Jordan on the podium, many sponsors gain little from their athletes during the games. The reason, as U.S. runner Leo Manzano, who won silver in the 1,500-meter in London, found out, is the International Olympic Committee’s Rule 40, which bars athletes from promoting non-official Olympic sponsors during the two-week competition.

Since adidas was the official shoe sponsor, this meant that Manzano was forced to take down a Facebook photo of his Nike track shoes or face Rule 40 discipline, which could include financial penalties or “ultimately, disqualification.” Manzano removed the photo from his Facebook page and added a message: “I am very disappointed in Rule 40 of the USOC as I just had to take down my picture of my shoes and comments about their performance.”

One retired U.S. runner, Lauren Fleshman, a former world champ, found a loophole to help her friend. As a non-competitor in London, she wasn’t bound by Rule 40 and did both energy drink-maker Red Bull and U.S. runner Alysia Montano a favor by tweeting that “redbull gives [Alysia] wings.”

This retired athlete angle may loom large for Phelps’ sponsors. Due to Rule 40, Subway was not allowed to use Phelps in its TV ads for the duration of the Olympics. But if Phelps does retire, as he plans to, Subway won’t face such restrictions during the 2016 Olympics in Brazil. Ironically, Phelps being out of the pool will make him even more marketable to his sponsors, which will be free to show the face of the American legend in their commercials throughout the two-week period when every athlete in the world strives to become the next Michael Phelps.

And only then will Phelps have complete control over his brand during the Olympics. In 1992, all it took was a flag. Now, it takes retirement for Phelps to be, other than in name only, like Mike.

No Accounting for Taste