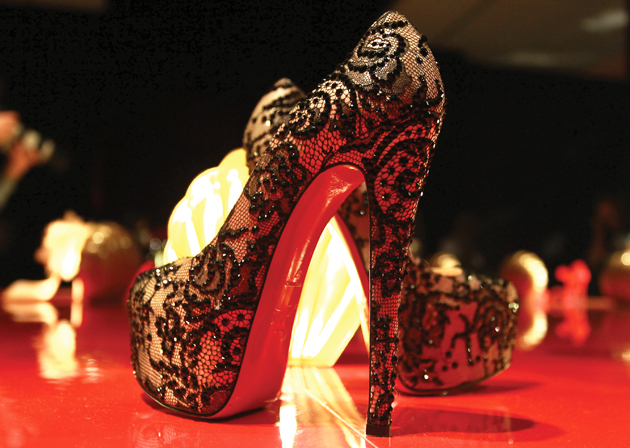 In 1977, Elvis Costello sang “The Angels Wanna Wear My Red Shoes.” While certainly an interesting sartorial choice for angels, red shoes are a favorite of Pope Benedict XVI, who has been known to sport bright red loafers as part of a long-standing papal tradition. Divine inspiration aside, these days the most famous red shoes would have to be those made by French designer Christian Louboutin. Technically, these shoes aren’t entirely red but instead feature red, lacquered soles that contrast with the colors of the rest of the shoe. Louboutins typically sell for about $1,000 a pair, but are nevertheless favorites of fashionistas everywhere. Jennifer Lopez even had a hit song a few years ago called “Louboutins,” which highlighted her love for the distinctive footwear.

Louboutins are also popular in the courtroom, where they were recently the subject of a lawsuit intended to determine whether or not the designer’s signature red soles could be officially trademarked. The problem started when fellow designer Yves Saint Laurent began selling an all-red shoe, which, of course, included a red sole. Louboutin sued, claiming a violation of its trademark, and sought an injunction that would stop the further sale of YSL’s offending design.

Initially, the lower court denied the claim by ruling that a single color could not be trademarked in the fashion industry, since color is so integral to clothing design. Limiting the use of a certain color, the court argued, particularly in fashion, would unfairly hamper competition. In September, however, an appeals court clarified the decision by saying that Louboutin could trademark red soles, but only as long as the soles contrasted with the color of the upper part the shoe. Monochromatic red shoes like YSL’s line did not violate this trademark. It was the rare case where both parties seemed to have gotten what they wanted and walked away happy.

In essence though, Christian Louboutin was able to successfully trademark the color red. Or at least as it is applied to shoe soles. Usually when we think of trademarks, we think of logos like the Nike swoosh or the NBC peacock. But trademarking a color is not as absurd or unprecedented as it sounds. Many companies have done the same with their own chosen hues: the canary yellow of 3M’s Post-Its, the brown of UPS trucks, the pink of Owens-Corning insulation, the green of John Deere tractors. Even Home Depot’s orange, T-Mobile’s magenta and Target’s particular shade of red have been trademarked. Jeweler Tiffany, which has trademarked the robin’s egg blue of its packaging, even went so far as to submit an amicus brief to the court in support of Christian Louboutin’s trademark rights.

The success of these color trademarks stems from the 1995 Supreme Court decision in Qualitex Co. v. Jacobson Products, Inc. In that case, the Court determined that the green-gold color of Qualitex’s dry cleaning pads could be trademarked if the color had acquired a secondary meaning in the eyes of the public that identified it with a specific company or product and as long as the color had no other significant function except to identify who made the product. For example, insulation doesn’t need to be pink, but because Owens-Corning has chosen to color it that way, pink insulation has become synonymous with the company and, therefore, no competitors can produce pink insulation without violating the trademark.

In some ways, Christian Louboutin’s trademark fight is reminiscent of Apple’s billion-dollar patent victory over Samsung. Although from a legal standpoint, trademarks and patents are two different things (trademarks protect the elements that distinguish one product or company from another while patents protect inventions themselves), both deal with intellectual property. And as these cases have demonstrated, design can be extremely valuable, whether it is derived from the red soles of a pair of high heels or the rounded corners of a rectangular smartphone. Because after all, in a crowded marketplace, you can’t just protect your assets, you have to look good doing it, too.