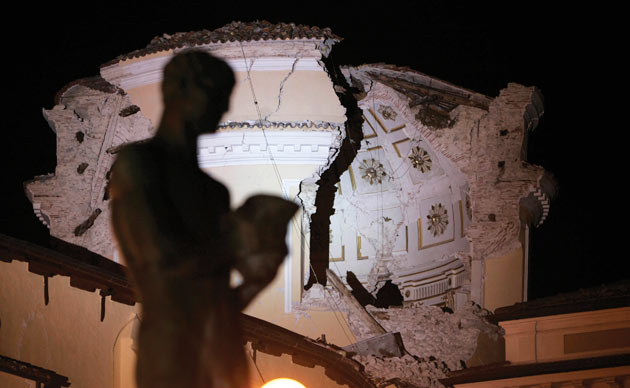 In scientific terms, a hazard prediction is defined as a statement about the future that is probabilistic in nature and incorporates a time span within which the hazard is anticipated. This term has come into the spotlight with the recent conviction of seven Italian scientists on charges of manslaughter.

The men, all members of Italy’s Major Risks Committee, were alleged to have made falsely reassuring statements concerning the likelihood of a major earthquake occurring in L’Aquila, Italy in April 2009. Yet it was the communication of this likelihood to the public that transformed the scientists’ evaluation that “a major earthquake in the area is unlikely but cannot be ruled out” into the message, “no danger.” This case highlights the limitations of hazard prediction and raises the important matter of how the scientific uncertainty inherent in hazard forecasting can be best conveyed to the public.

A study of earthquake scientists (which predated the L’Aquila verdict) from University College of London’s EPICentre found that they regard prediction as a highly stigmatized pursuit. The seismologists portrayed earthquake prediction as “bad science” because it is considered to be impossible. For most, prediction is unfeasible because of the chaotic nature of the geological system itself, but others believe the impossibility is due to the limits of current knowledge. Semantics aside, the scientists were clear: devoting the lion’s share of seismology funding to studying earthquake prediction is fruitless, primarily because it detracts resources from their favored objective of improving society’s resilience to earthquakes.

“What I’d like to see in 100 years’ time is a situation where we don’t have to bother trying to predict earthquakes anymore because all the building stock is sorted,” stated one scientist. Another noted that “the buildings will still fall down, even if there was a prediction, so I think it’s more important to concentrate on risk mitigation.”

These sentiments highlight how “prediction” is taken to mean an exact forecast of when, where and how extensive an earthquake will be. Seismologists eschew this type of prediction, preferring to focus efforts towards better engineering, strengthening building codes and increasing public awareness. Even though earthquake prediction was a key objective of early seismology, in the late 20th century it underwent a dramatic fall from grace due to the failure of sustained research to indicate any consistent precursors of seismic activity.

Paradoxically, it was an earthquake prediction of this nature that spurred the L’Aquila case. A laboratory technician who regarded radon levels as a precursor to seismic activity predicted that a major earthquake would occur in the L’Aquila area around the time that the 2009 earthquake struck. This, combined with the dozens of low-magnitude tremors in the region in the months prior, raised concern that a major quake might occur.

One week before the deadly disaster, the Major Risks Committee convened to analyze the evidence. The alleged “falsely reassuring statements” emerged from this meeting. They cast light on how scientific uncertainty regarding likelihood is communicated as it moves from the scientific world, via the mass media, into lay thinking.

The minutes of the committee meeting reveal that various scientists said that a major earthquake was unlikely but could not be ruled out. “Because L’Aquila is a high-risk zone,” stated one committee member, “it is impossible to say with certainty that there will be no large earthquake.”

While the prosecutor in the L’Aquila case accused the committee members of “translating their scientific uncertainty into an overly optimistic message,” the accused scientists claimed that they were not responsible for informing the public. The announcement about the impending earthquake was made by the non-scientist on the committee. It was then conveyed as certainty to the public by the media.

The communication of scientific uncertainty is clearly difficult. There is evidence that the public desires assurance from scientists, whom they assume must be in the know. They find uncertainty hard to swallow, particularly as the non-scientific meaning of uncertainty is “not knowing.” Others argue that if scientists are transparent about the uncertainty inherent in their findings and take the trouble to convey it in a digestible form, the public will understand their frame of reference. Weather forecasts, for example, are probabilistic predictions that lay people have come to understand fully. By and large, when people are presented with probabilities, in ways that psychological research show to be effective, they feel that they know the risks and can take responsibility for their own choices.

Following the latter line of argument, instead of pronouncing “no danger,” a more complex, precautionary statement from the committee would have been preferable. Heightened preparedness activity would have also been prudent, especially since there was a concentration of medieval buildings in L’Aquila. Scientific uncertainty should not be used as an impetus to complacency. The presence of uncertainty should not be an impediment to people preparing for hazards.

Had the major earthquake not hit, preparation for an earthquake would have been a useful exercise for future scenarios. However, “crying wolf” could also have negative effects. It could damage earthquake scientists’ credibility. It might also undermine the public’s willingness to act in response to future threats by creating hazard fatigue, or complacency in the face of continually being exhorted to respond to the next “big one” that never comes to pass. It is difficult to sustain a high level of public preparedness during the average intervals between major disasters.

Enzo Boschi, one of the accused L’Aquila scientists, who was president of the National Institute for Geophysics and Volcanology at the time, has said that the key cause of the tragedy was the poor building standards in the area. This speaks to the need to pay attention to seismologists’ adage that “earthquakes do not kill people, buildings do.” The stigmatization of prediction, found among seismologists, is functional. It turns seismologists’ skills to the lessening of the vulnerability of people and structures. Others involved in the wider risk field would do well to adopt this focus.
Dr. Helene Joffe is a reader in psychology, and University College London and social science lead on EPICentre, UCL's interdisciplinary center for the study of earthquakes.