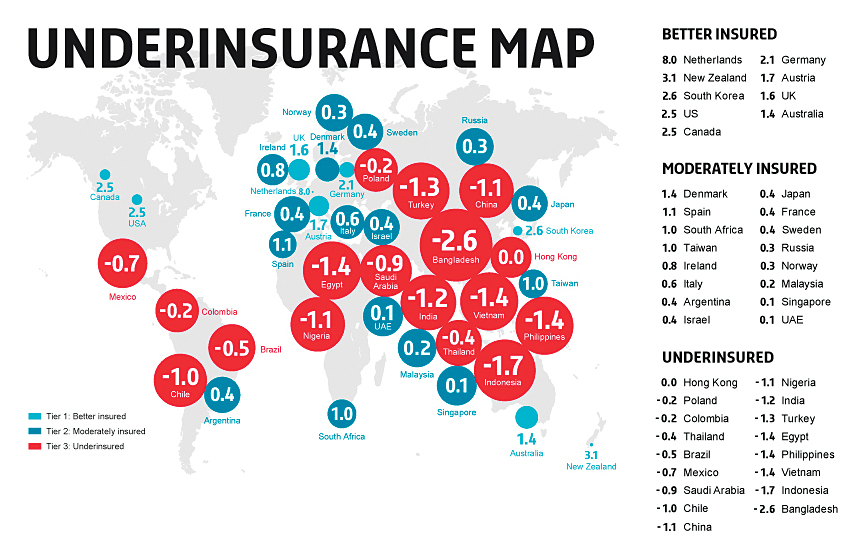 For each country, Lloyd’s calculated the amount spent on insurance and subtracted the expected loss due to natural catastrophes. This number was adjusted to account for differences in GDP levels and benchmarked as a percentage of the country’s GDP. (click for full size, image courtesy of Lloyd's of London)[/caption]

Many parts of the world are severely underinsured. In all, 17 countries have been deemed “significantly underinsured,” with a combined average annual insurance shortfall of more than $168 billion, according to a report by the Center for Economic and Business Research (CEBR) and Lloyd’s of London, a specialist insurance market in the UK.

Of the 17 countries on Lloyd’s list, eight are in Asia. China alone was found to be underinsured by $79.6 billion, making it the most underinsured country in monetary terms.

Never have the consequences been so apparent than during the 2004 Indian Ocean tsunami. The tragic disaster killed an estimated 222,000 people but cost the insurance industry just $1 billion in claims, according to the Insurance Information Institute (I.I.I.).

Contrast this with Hurricane Irene, which was a disruptive storm that did significant damage, particularly in the Northeast, but its impact on life and property paled in comparison to the Southeast Asia tsunami. Yet its winds and rains caused $4.3 billion in insured damages—more than four times that of the 2004 tsunami.

“I hope that this research will stimulate a debate on how governments, businesses and the insurance industry manage the risks of a natural catastrophe—and particularly on the merits of risk transfer versus the use of public funds to cover the cost,” said Richard Ward, chief executive of Lloyd’s. “Insurance exists for a purpose: to alleviate the financial consequences of disaster.”

Ward highlighted another United States/Asia comparison of how disaster recovery is financed. The 2008 Sichuan Province earthquake in China caused an estimated $125 billion in economic damage while the combined impact of Hurricanes Katrina, Rita and Wilma in the United States in 2005 totalled $170 billion. But while the U.S. National Flood Insurance Program paid out $23 billion, claims from the earthquake, which killed 84,000 according to the I.I.I., reached just $366 million.

Neither of these totals fully funded the damage. The U.S. government ended up shelling out nearly $30 billion to aid the recovery, according to Lloyd’s, but this sum was nothing compared to the $138 billion put up by Beijing. “Interestingly, the United States and China have drastic differences in their level of disaster-readiness, but the greatest difference of all came down to the amount of money paid by taxpayers towards each country’s recovery,” said Ward.

While Asian nations do dominate the Lloyd’s list of the most underinsured nations, this remains a problem in other areas. Egypt, Turkey, Nigeria and Mexico could all benefit from higher insurance penetration levels as could some seemingly more mature economies, like Chile and Poland.

History has proven that many of the underinsured areas are prone to disasters, so these figures should serve as a wake-up call to governments. If they cannot convince the businesses and citizens in their countries to adopt the risk-transfer mechanisms that have been widely used for decades by the developed world, they will have to foot the bill for disaster recovery with state funds.
Emily Holbrook is the founder of Red Label Writing, LLC, a writing, editing and content strategy firm catering to insurance and risk management businesses and publications, and a former editor of Risk Management.

Improving Supply Chain Resiliency in China and Beyond