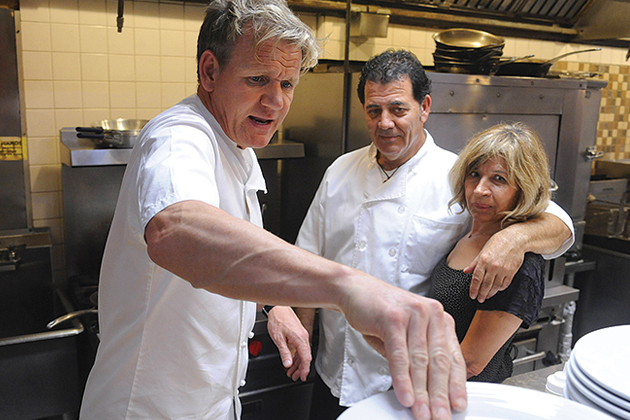 I've never really been a fan of reality shows. If I'm going to devote my time to television, I want professional actors, scripts and the high-level production values of Game of Thrones or True Detective, rather than the approach of "set up a few cameras and hope something interesting happens." (I know most reality shows are edited for dramatic effect, but their purported mission is to depict real events.)

I do make an exception, however, for business makeover shows. It is probably because, in theory, these shows are more about business best practices than soap-opera drama—altruism rather than voyeurism, if you will. So when I heard that Gordon Ramsay was pulling the plug on Kitchen Nightmares, I was a little disappointed. I'm going to miss him berating clueless restaurant owners and providing me with an ample dose of schadenfraude.

But there was more to Kitchen Nightmares than just rubbernecking business disasters while a British guy spouted profanity. The U.S. version of the show actually had a decent track record of saving the restaurants they visited: about 40% remain open. This isn't bad considering a Cornell University study found that 60% of all restaurants close within three years of opening. On top of that, most of the businesses on the show would likely have closed without his help.

Quality is king. The first thing Chef Ramsay did when he visited a restaurant was sample the menu. Without fail, he would declare the food inedible. This would somehow shock the owners, who were under the impression that their food was great, even though their business was failing. Typically, upon further inspection, Ramsay would uncover filthy kitchens, low-quality or even spoiled ingredients, and cooks that couldn't cook. The lesson here is obvious, but often overlooked: quality is the cornerstone of success. Without it, little else matters.

Stick to the basics. Chef Ramsay often encountered restaurants with extensive menus that were trying-and failing-to be all things to all people. Many chefs would create elaborate dishes with tons of fancy ingredients that, when combined, somehow made the food taste worse. It's a problem common to many businesses that expand into areas they know nothing about or add unnecessary features that compromise their core product. Keep it simple and focus on what you do best.

Know your market. An owner who opens an Italian restaurant on a block that already has five other Italian eateries is going to find it difficult to sustain that business, no matter how delicious they believe their food to be. After all, why would you use Google+ when Facebook already exists? Sometimes the path to success is the road less travelled.

To lead is to communicate. Every episode featured owners and staff that didn't communicate with each other. Problems went unaddressed, animosity festered and the restaurant suffered. Without communication, a business cannot thrive. Shared goals bring out the best performance from employees at every level. But there are no mind readers-goals, strategies and concerns need to be communicated clearly, starting at the top.

Beware complacency. Most of the restaurants on Kitchen Nightmares were successful once. But they took success for granted, got lazy and let their standards slip until customers stopped coming. Even after Chef Ramsay suggested changes, many resisted, thinking they knew better than an award-winning expert. Complacency breeds inaction, resentment and, perhaps even worse, apathy, which only increases the chances of failure. Change can be difficult, but it can also reignite the passion of a business that has lost its way.