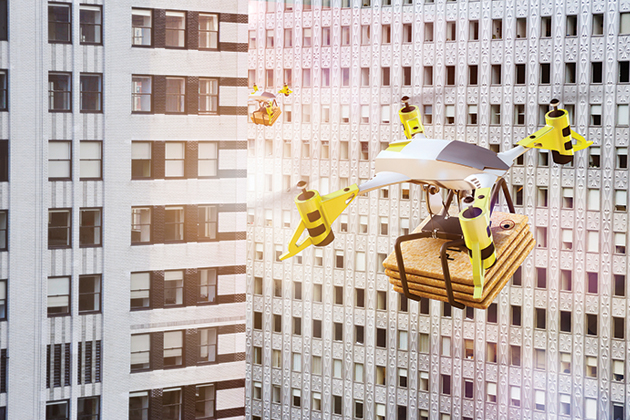 Drones, or unmanned aerial vehicles, have found a wide and expanding commercial market as they have become cheaper to buy and easier to use. Practical applications abound: Farmers can efficiently survey wide expanses of crops and related infrastructure; photojournalists can gain new access and perspectives on events; and insurance companies can quickly survey sites after casualty events. Until recently, however, permanent rules regarding their safe operation were lacking.

On Aug. 29, the Federal Aviation Administration’s long-awaited regulations for drones weighing 55 pounds or less went into effect, replacing the temporary regulations that commercial drones have been operating under for years. The new rules retain most of the salient safety features as before but, anticipating new technologies and uses, the FAA also built in flexibility by providing for a waiver of most of the new rules if a case can be made.

According to the new requirements, drones must be under line-of-sight control, remain less than 400 feet off the ground, and cannot fly above people not involved in operating them. They may carry objects for hire provided the total weight still does not exceed 55 pounds. The remote pilot in command must conduct a pre-flight inspection, and may not fly the drone in certain airspaces, such as near airports.

Of these, line-of-sight control remains the single most important limitation on drone operation—it precludes Amazon from delivering packages by drone, for example. This may be the area where, as technology develops, the FAA will be pressed to grant waivers to test more indirect or autonomous control features.

Perhaps the most significant change is the relaxed requirement for becoming certified to pilot a commercial drone. Previously, an operator had to have a pilot’s license or go through a process to gain a 333 exemption. Now, an operator who meets the minimum age of 16 can become certified by passing an aeronautical knowledge test and a TSA screening.

Notably, the FAA considered but did not adopt a mandatory insurance requirement.  Nevertheless, drone insurance has been available since drone use became more common and can be relatively inexpensive. Insurers have quoted as little as $1,000 to 2,000 per year for $1 million in liability limits plus physical damage coverage for a common $2,000 drone. The premiums vary with factors such as the cost and type of drone being operated, how it will be used, the deductible, and qualifications of the pilot. Currently, insurers may offer discounts for more highly trained and experienced pilots. It remains to be seen whether insurers will charge higher premiums for pilots being certified under the new, relaxed standards.

It is difficult to find coverage for most drone risks under the Insurance Services Office (ISO) standard commercial general liability (CGL) policy. The standard exclusions include one for bodily injury and property damage “arising out of the ownership, maintenance, use or entrustment to others of any aircraft owned or operated by or rented or loaned to any insured.” As the FAA defines a drone to be a type of aircraft, an insured should not count on coverage under a standard CGL policy for bodily injury or property damage caused by a drone. It might be possible, on the other hand, to find coverage for an invasion of privacy claim, a concern as drones buzz over private property or past windows. The standard definition of “personal and advertising injury” includes “oral or written publication, in any manner, of material that violates a person’s right of privacy.”

ISO first responded to the emerging use of drones by introducing endorsements that clearly disclaimed any coverage for drone risks under a CGL policy. They did, however, also offer endorsements extending coverage for bodily injury and property damage, or for personal and advertising injury, or both. It is not clear, though, how well-prepared general liability insurers are to underwrite these risks.

Aviation policies adapted specifically for drones have long been available. In addition, ISO recently introduced its own stand-alone drone insurance policy that adds features of its standard CGL policy to the structure of an aircraft form.

The aircraft forms provide a broad grant of coverage for bodily injury or property damage liability, including a duty to defend. Coverage typically extends only to scheduled aircraft, and may also designate insured uses and pilots. Notable common exclusions extend to the insured’s own employees or property, for loss or damage to the drone itself, and for noise or other pollution unless caused by a drone crash or collision. Other exclusions and conditions vary.  For example, a London aircraft form expressly bars coverage if the drone is not operated by the designated pilot or in accordance with FAA rules. The ISO form is silent on these issues.

Coverage for invasion of privacy claims may require a separate endorsement and premium. The ISO form only extends to bodily injury and property damage claims, and the London form expressly excludes such claims.

The policies also provide what in aircraft parlance is called “hull” coverage, or coverage for damage to the aircraft or drone itself. This coverage may be written on an agreed value basis, and may extend to theft or disappearance. Other coverages pertaining to cargo attached to the drone may also be included. Again, the language is not uniform and differences in wording may become relevant depending on the use of the drone.

The new FAA drone regulations do not apply to the non-commercial, or “hobbyist,” operation of drones. Congress, in fact, prohibited the FAA from going beyond existing rules so long as the drone is no more than 55 pounds, is under line of sight control, does not interfere with manned aircraft, and is operated “in accordance with a community-based set of safety guidelines and within the programming of a nationwide community-based organization.” (The FAA declined to clarify what this last requirement means.)

For the hobbyist, coverage may be available under a homeowners policy, at least for bodily injury or property damage claims. The standard homeowners policy excludes coverage for aircraft risks but typically excepts from that exclusion a “model or hobby aircraft.” Homeowners policies vary more widely as to whether they cover invasion of privacy claims.
Dennis M. Cusack is an insurance recovery partner in Farella Braun + Martel’s San Francisco office.