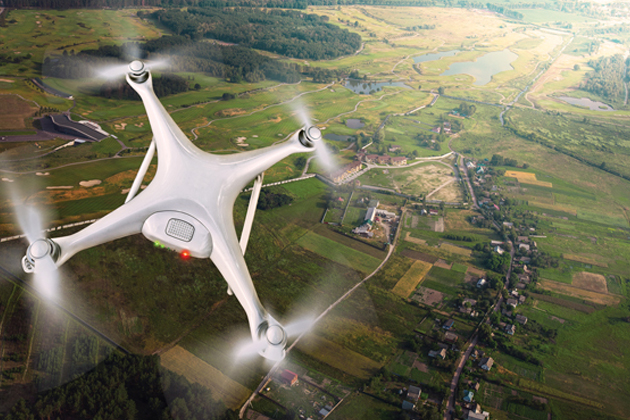 In late August, thousands lost power after a torrential downpour from Hurricane Lane dropped some 52 inches of rain across Hawaii’s Big Island in just 48 hours. The downpour also caused landslides, inhibiting recovery efforts. This major storm was on the heels of another natural disaster in the state: the Kilauea volcanic eruption, which spewed molten lava for months, destroying hundreds of homes and igniting several large brushfires.

As in other recent disasters across the country, first responders in Hawaii turned to drones to help locate people who had become trapped in demolished homes and businesses, or were surrounded by hazardous conditions. Drones played an important role in helping emergency crews to quickly launch search and rescue missions, assess the speed of molten lava, warn residents when to evacuate, and assess damages to roads in order to identify viable routes for passage.

Because of their size, cost and ease of operation, drones (also known as unmanned aviation vehicles or UAVs), can go where airplanes and people cannot. Drones can take close-up images and quickly transmit them, making them ideal for emergency situations.

“Drones are there for the detail,” said Cory Shelton, head of UAV technology with Geomni, a Verisk business. “In 10 or 15 minutes, a drone can acquire hundreds of pictures, each of which carries data. Humans just aren’t capable of that.” The quality of images transmitted is also consistently better. “Even from a plane or helicopter, they wouldn’t be able to get the detail,” he said. “It’s far enough away to get perspective, but close enough for detail.”

In June 2017, the Federal Aviation Administration (FAA) loosened restrictions on drones, allowing greater use for filming, inspecting facilities and other commercial activities. Since then, thousands of people have obtained FAA certificates allowing them to fly drones commercially, and more than 770,000 drones have been registered to fly in U.S. airspace, according to CNN Money.

Of the industries using drones, construction and engineering tops the list, responsible for 35% of professional users. Government is second at 24%, transportation and warehousing third at 13% and the insurance industry is fourth at 12%, according to Goldman Sachs.

The insurance industry, in fact, has quickly discovered a niche for drones because of the speed at which damage can be assessed and claims processed. “About 35% to 40% of the interest we see in drones is from the underwriting side,” Shelton said. “They want to get drones involved because of the convenience and safety.”

More and more, drones are also being used as a tool for the front-end of the process, to mitigate risks. In California for example, he said they are used to measure distances from a structure to brush, to then calculate potential losses that could arise from a wildfire.

Other enterprises are using drones to monitor large parking lots. “People often don’t realize that a parking lot is one of the biggest investments for some businesses, such as commercial retailers—large companies like Amazon and Walmart,” Shelton said. “An average size parking lot can run from $500,000 into the millions.”

He noted that an inspection with a drone is usually done at 35 to 40 feet and can capture the entire area of a parking lot in one to two hours. A damage assessment is then made based on its condition. “It gives the risk manager of the company an insight into their property,” he said, explaining that they could then use this information to do patch repairs to prevent further damage from weathering.

“I previously worked for an auto insurance carrier and you wouldn’t believe the number of claims we received simply because somebody wasn’t maintaining a parking lot,” Shelton added. “There is generally no one in a large retail store that examines the parking lot, so this can go unnoticed.”

Drones have also long been used for monitoring power lines and checking cables, he noted, so providers of 5G service from cell towers may adopt them to check for damage before making upgrades. “Interestingly enough, some of the providers don’t have good pictures of the available space on receivers and transmitters,” he said. “Drones are being used to provide a tower-by-tower survey to help assess the condition of the cell towers, and the readiness for some of the 5G antenna receivers.”

New programs are in the works to make drone use more affordable and accessible for risk managers. DeVries said FM Global has started a pilot program to see how drones can assist with loss prevention.

For example, he said, “if you want to look at moisture that is perhaps trapped on the roof, we can use infrared cameras to see if there are wet spots.” One could also check the flashing on the roof of a tall building and more easily identify  anything loose that needs to be fastened before a storm. He added, “We can quickly create a mosaic, stitching all the images together, and you get accurate and detailed 2-D maps.”

Drones can also help provide elevation data and create 3-D models to help monitor risks. “So now we can have a conversation with the risk manager about flood mitigation—flood walls or barriers,” DeVries said. “Now you can identify the lowest point and the most likely entry for water. We can get very targeted with the recommendations and work closely with the risk manager to make sure they take appropriate measures against whatever peril they might be facing.”

With so many current and potential uses for drones, Goldman Sachs says that the industry’s rapid growth has outpaced the development of rules and regulations. While regulations have been loosened, experts believe this is not enough, as current laws state drones cannot fly higher than 400 feet, cannot operate above people and must be operated by someone with a remote pilot certificate.

The Federal Aviation Administration (FAA), however, continues to evaluate the restrictions, Goldman Sachs said, noting that the anticipated regulatory clarity should unlock demand.

Many remain concerned, however, that some risks may pose longer-term limitations. For example, a drone interfering with other air traffic could be disastrous and risks like these still need to be addressed. Shelton noted, “No matter how many restrictions or controls there are, the ability to have a remote-controlled object will always pose a threat to commercial airlines.” Even with regulations in place,“there is not much to keep someone from putting one together and flying it,” he said.

Nevertheless, experts are optimistic about the prospects for drones. “In the next four or five years, a lot of our lives with be altered by the technology. And drones will change,” Shelton said. “The future of frequently seeing drones in the sky may not be too far away. I think it will be as common to see one as it is now to see a UPS truck going down the road. But the technology needs to get there and the laws need to catch up.”