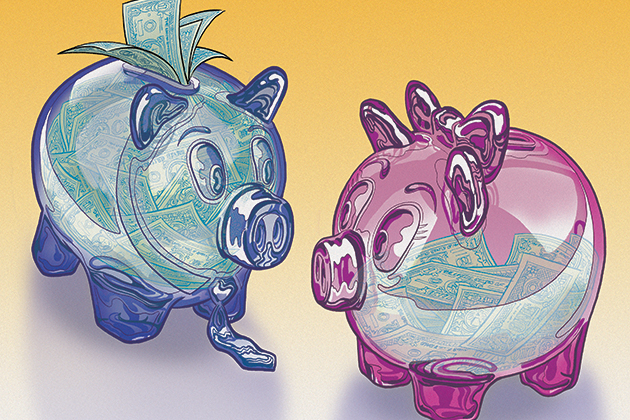 It was a scene straight out of the 1980s: When Donna Kassman complained about a salary cut, she was told she didn’t have to worry because she “had a nice engagement ring.” In fact, Kassman later even received a $20,000 pay cut when she went on maternity leave, then she says she was overlooked for promotion despite a long, successful tenure with her company. Citing her performance with employees, the firm made her attend coaching sessions, based on complaints by two male employees that she was “unapproachable” and “too direct.”

Yet it wasn’t 1980. It was 2011. Today, Kassman’s lawsuit against her employer, KPMG, has turned into a class action lawsuit involving nearly 1,300 women, both present and former employees. The lawsuit alleges “systemic discrimination in pay and promotion, ­discrimination based on pregnancy, and chronic failure to properly investigate and resolve complaints of discrimination and harassment,” according to Sanford Heisler, LLP, the Washington, D.C.-based law firm handling the case.

Similar charges have been brought against some of the largest companies in the ­country, including Microsoft, Citigroup, Hyundai, Home Depot, Goldman Sachs and Quest Diagnostics. There is no one industry paying women an equal amount as men of the same skill level. Even highly skilled jobs do not equate to equal pay—in fact, a recent Doximity study of medical professionals revealed some of the largest pay gaps. Male ophthalmologists reportedly earn $95,000 per year more than female ophthalmologists (a 36% difference), and male cardiologists earn $97,000 more than their female counterparts (a 29% difference).

How Wide a Gap?

In order to earn the 2016 wages of their male counterparts, women would have to work until April 4, 2017. Coined Equal Pay Day by the National Committee on Pay Equity, the day shifts each year based on U.S. Department of Labor median wage data.

The U.S. Census Bureau annually measures the wages of both genders across all industries. While the figure fluctuates slightly year over year, the wage gap women face typically falls between 77 and 79 cents to every dollar earned by men. Other calculations differ slightly, but the overall picture remains the same. According to the U.S. Bureau of Labor Statistics and analyst group 24/7 Wall St., women make 82% of what their male counterparts make.

Laws and Their Impact

No matter which figure is used, the data unequivocally shows that women are compensated less than men, which technically has been prohibited in the United States since 1963, when President Kennedy signed the Equal Pay Act into law. At that time, women were earning 59 cents for every dollar earned by men. The situation for women has improved, but a notable gap remains. In 50 years, the payment needle has nudged just 20 cents, where it has stalled for the last decade.

The disparity prompted President Obama to sign the Lily Ledbetter Fair Pay Act of 2009, which “restores the interpretation of the law that a pay discrimination claim accrues whenever pay discrimination affects an employee,” according to a White House press release. In 2010, the Obama Administration also established the National Equal Pay Enforcement Task Force, designed to form a cross-agency effort among the Equal Employment Opportunity Commission (EEOC), Department of Justice, Department of Labor, and the Office of Personnel Management to build an enforcement mechanism to compel better implementation of equal pay laws.

In addition, the administration introduced the White House’s Equal Pay Pledge, which asks companies to pledge to end the wage gap and promise to conduct annual reviews of pay, hiring and promotion practices. To date, 26 companies have signed the pledge, including Facebook, Microsoft and General Motors.

Underpaying women is a serious mistake for companies, whether done intentionally or not, and demands greater attention, according to Richard Warren, employment and labor deputy group leader at the law firm Miller Canfield. “Employers who cannot explain the pay differential by pointing to a legitimate, non-gender-related factor, such as prior work experience or good performance, can be found liable for a substantial amount of economic damages,” he explained.

In 2011, for example, Dollar General asked a federal judge in Alabama to approve an $18.75 million settlement to female managers who claimed gender-based wage discrimination. In January 2016, Novartis agreed to an $8.2 million settlement in a proposed class action lawsuit claiming unequal pay, just six years after the company had agreed to pay $152.5 million to settle another gender discrimination class action.

Women are not the only ones being discriminated against, suggesting that greater scrutiny of gender issues may be needed across the board. In 2014, Ventura Corporation, a beauty products wholesaler, agreed to pay $354,420 for refusing to hire male  employees in sales positions and for retaliation. In 2012, the FBI was sued by a male employee who claimed the physical fitness test to become an agent was biased against men. In 2010, NBC and Jimmy Fallon were sued by a stage manager who claimed he was demoted and fired based on his gender.

State legislation is beginning to gain strength as well. In 2015, California passed the Fair Pay Act, which gave teeth to the existing Equal Pay Act, placing the burden on employers to prove a man’s higher pay is based on factors other than gender. New York’s fair pay legislation was updated in 2016 to increase damages for pay discrimination violations. Other states, including Connecticut, Delaware, Illinois, North Dakota and Oregon, have some form of related legislation in place or are reforming existing statutes.

In some states, such as California, laws are tougher than the federal law. “We don’t look at equal pay in the same establishment anymore,” said Kate Gold, partner at Drinker Biddle in Los Angeles. “That ‘same establishment’ requirement was eliminated from the new law. Because that language was taken out, we’re counseling employers—particularly those with multiple locations—to look across their whole organization. Plaintiffs’ lawyers will not just be looking at what people are paid in Los Angeles, San Francisco or Fresno, but they may also be looking at Oregon, Nevada or New York City.”

Meanwhile, Massachusetts prohibits asking a candidate’s current salary, a practice that can perpetuate women being underpaid. “That’s something that, regardless of the legislation, employment lawyers are talking to their clients about,” she said. “Start looking at how to really structure your pay practices, promotions and pay raises and do not just do it the way it’s always been done.”

Gold believes such laws will in turn expand litigation. “Certainly when you have a new law in California, we have a very robust plaintiffs’ bar,” she said.

Plus, a new EEOC reporting form containing significant changes goes into effect in March 2018. That form will require employers to report their workforce not just in terms of race and gender, but also by detailing the different pay bands. “Now that the federal agency will have this information, employment lawyers are certainly anticipating that the EEOC will be looking at it and will do something should they find disparities that can’t be explained,” she said.

Where the Risks Lie

To add to the growing list of financial consequences companies face, Kate Mueting, partner at Sanford Heisler, said employers could be on the hook for back pay and more. “The Equal Pay Act advises that employers have to pay employees—women—double what they were underpaid as a penalty,” she said. Should the employee prevail, employers would also be required to pay the employee’s attorneys’ fees.

In addition to the significant legal costs and employee resources required to address litigation, there are extended risks when lawyers access employment documents. “Sometimes we will be pursuing a gender discrimination claim and we will learn through the process of discovery that the company is also not paying people overtime or they’re having problems with how they’re managing their 401(k) plans, which could lead to ERISA lawsuits,” Mueting explained.

There is also the real possibility of a class action filing. Her firm often files such wage discrimination charges as class actions. “We have seen that a failure to pay women unfairly isn’t an isolated problem,” she said. “More often than not, it is a systemic problem. That significantly increases the employer’s exposure.”

Such lawsuits also come with reputational consequences, Mueting added. But beyond litigation, she believes the entire practice of underpaying one segment of the workforce simply is not practical from a business perspective. “There’s a real inefficiency in not paying people fairly,” she said. “It’s inefficient to pay a man more than he deserves to be paid. It’s also inefficient to pay a woman less than she deserves to be paid, even if she doesn’t file a lawsuit. The employer is not maximizing what it can get from her, still not using her to her full potential. It does not make business sense to pay people unfairly.”

Employers should examine bargaining agreements as well. “Collective bargaining agreements tend to have job titles and wage rates in them, and we’re seeing that that’s not necessarily a bulletproof defense,” Gold said. That is because the work being performed is often not the work outlined. “It’s not going to be a defense to say, ‘I was just paying the wage rate for that job skill,’ particularly if you’ve got people who are actually doing the same work and being paid differently,” she said.

In light of these risks, risk management should consider an audit of payroll practices and wage data. The best approach is to identify the pay differences and consult experts on how to eliminate them, Warren said. Risk managers can take three distinct actions to mitigate the likelihood of pay discrimination claims. First, he suggests adopting policies that identify specific factors, such as prior experience and education level, then using them to establish starting pay for new employees.

“Second, make sure that the human resources department (or risk management) is involved in making and/or reviewing starting pay decisions to confirm that the policy is being followed, and that similarly-placed workers are paid similar salaries,” he said. “Third, conduct periodic salary reviews to compare salaries earned by male and female workers performing similar jobs and, where disparities reveal themselves, correct them before they turn into lawsuits.”

For those trying to convince upper management to make the necessary changes, Gold pointed out that the effect on the bottom line can be very persuasive. “The risk of loss when you’re talking about class action and potential exposure to class action, which could be nationwide, can be really big numbers,” she said.

All experts stress that the law is not intended to give what is not earned. “If someone is more skilled and has more experience, that’s a justifiable reason for paying that person more,” Mueting said. “That’s not something the law is trying to prevent. But going outside what should be accounted for and taking gender into account—that’s when it becomes a problem.”
Lori Widmer is a Philadelphia-based freelance writer and editor who specializes in risk management and insurance.