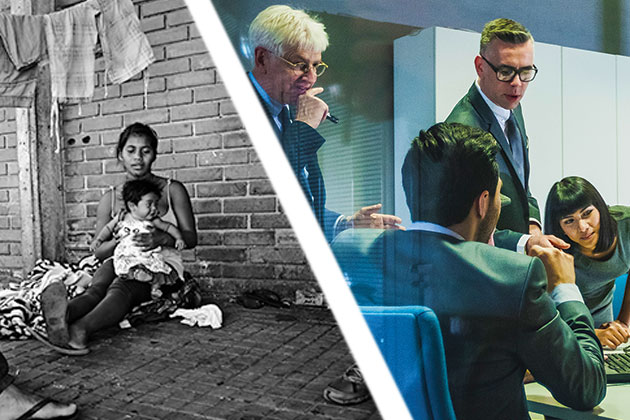 The willingness of developing countries to allow businesses to invest without proper oversight of their activities has often had damaging consequences, however. For example, while Paraguay is now the fourth largest exporter of soya beans and has attracted major U.S.-based agribusiness giants like Cargill Inc., Bunge Ltd. and Archer Daniels Midland Co., intense deforestation to make way for soy plantations has caused the country’s Atlantic forest to shrink to just 7% of its size 40 years ago. This has caused increased flood risk in the countryside and pushed the rural population into the cities.

Other agrarian economies tell a similar tale. In recent years, roughly 12% of Papua New Guinea has been annexed to timber and palm oil companies through a leasing system intended for small-scale agriculture. Meanwhile, Cambodia is renowned as a hotspot for “land grabbing,” where investors and companies buy up vast areas of poor countries, resulting in mass, forced population displacement. Campaigners and human rights groups say that all these activities can be directly and indirectly traced back to western companies and financial investors, yet little action is taken against any of them.

Traditionally, companies have dodged the bullets over their activities in the developing world, but that may be about to change. In fact, company bosses could now find themselves hauled before an international tribunal at The Hague in the Netherlands.

A New Focus for Prosecution

The International Criminal Court (ICC), which prosecutes individuals for genocide, crimes against humanity and war crimes, is aiming to more easily hold not only political leaders but also corporate executives accountable for actions that contribute to environmental damage and affect local populations. In an internal policy document released in September, ICC chief prosecutor Fatou Bensouda outlined what future cases will be prioritized, namely those regarding the illegal exploitation of natural resources, environmental destruction and land-grabbing.

The ICC has previously shown a willingness to apply its laws to situations involving environmental destruction. Between 2009 and 2010, then-prosecutor Luis Moreno Ocampo successfully obtained arrest warrants from the court against Omar Al-Bashir, the president of Sudan, for acts of genocide, war crimes and crimes against humanity (although he continues to evade arrest). Among other acts, these alleged crimes involved the contamination of wells and water pumps in Darfur to target and destroy certain groups of people.

Corporate directors from any country can be prosecuted as long as the ICC has jurisdiction over the country where the crimes took place. So far, 122 countries have ratified the Rome Statute that established the court, and an additional 17 are signatories to it. The ICC cannot prosecute cases that took place before it was established in 2002, however, and even events from after 2002 may escape prosecution if relevant states had not ratified the ICC’s statute at the time. The United States “unsigned” in 2002, for example, and says that it has no legal obligations arising from its former representatives’ signature of the statute. Only two other signatories—Israel and Sudan—have done this, while China, India, Russia and Indonesia have never signed or ratified.

Some experts are optimistic that the ICC’s new approach could reshape how business is done in developing countries. “Chasing communities off their land and trashing the environment has become an accepted way of doing business in many resource-rich yet cash-poor countries,” said Gillian Caldwell, executive director at Global Witness, a non-governmental organization that has been urging the ICC to investigate the issue.

“This decision by the ICC shows that the age of impunity is coming to an end. Company bosses and politicians complicit in violently seizing land, razing tropical forests or poisoning water sources could soon find themselves standing trial in The Hague alongside war criminals and dictators,” Caldwell said. “The ICC’s interest could help improve the lives of millions of people and protect critical ecosystems.”

Rogers explained that the policy is an internal ICC prosecution paper for selecting and prioritizing cases. “It does not create new definitions—and certainly not new laws,” he said. “CEOs could always be tried at the ICC if there was evidence that they had committed or aided and abetted international crimes—just like prime ministers or presidents. That has not changed.”

Instead, the major shift in the policy is one of context. “From now on, the prosecutor will focus resources on crimes that ‘are committed by or result in the destruction of the environment, the illegal exploitation of natural resources, or the illegal dispossession of land.’ But the situation must involve crimes that are already within the ICC statute, so this is a new focus—not a new crime,” Rogers said.

The element of the Rome Statute that is most relevant to businesses is crimes against humanity for forcible transfer of population (also called forcible eviction or forcible dispossession). “In practice, illegal forcible evictions are a result of land-grabbing. Environmental destruction and illegal resource exploitation also flow from land-grabbing,” he said. “So this certainly increases the risk to companies that invest in developing countries with a land-grabbing problem.”

Even if these cases do not end up being prosecuted in the ICC, the mere recognition that these human rights abuses should be considered alongside traditional war crimes increases the potential for reputational damage to businesses. “As a consequence, companies must carry out enhanced due diligence if there is any risk that they could be drawn into an illegal land-grabbing situation,” he said.

Developing countries have long been a lucrative market—and a dumping ground—for products that western countries will not touch. While the dangers of substances like lead paint, asbestos and some pesticides have been known in developed countries for decades—and their sale and use thus banned or curtailed—opportunities to shift these materials to emerging markets as cheap alternatives to their safer, more expensive counterparts have proven plentiful.

Manufacturers counter that they are simply supplying markets with permissible products and that they comply with the local laws of the countries to which they export. They contend it is not their problem that the legislation may not be as tough or as adequately enforced as in the United States or the European Union. Legally, they may have a point, but ethically, such views are becoming increasingly marginalized.

In September, the European Commission, the EU’s executive body, authorized the continued use of lead chromate in some industrial paint products because the Canadian company that brought the case—Dominion Colour Corporation—claimed that there were no viable alternatives that could be used in their manufacture, despite the fact that these pigments are carcinogenic, reprotoxic and toxic to acquatic life.

Environmental groups are concerned, however, because they fear that there are no adequate measures to ensure such products are being sold and distributed safely outside of the EU. “Dominion says the lead pigments it exports are used only for specific applications, but the company has no way of controlling how these products are used in countries in Asia, Africa and South America to which it exports them and where the biggest proportion of lead-poisoned children live,” said Kathleen Ruff, director of RightOnCanada, a human rights advocacy website. “By allowing their continued exportation, the European Commission has adopted a double standard, valuing the lives of people in the global south less than the lives of people in Europe. This is immoral and shameful.”

Advocates and health experts say that one of the key obstacles in the fight to ban the worldwide sale of hazardous products is that the countries to which they are being exported are simply unaware of the risks, or at least of the severity. Successful prosecution rates for health and safety and negligence failings are also low, and the chance of suing the international parent company is lower still. Another problem is that hazardous materials are often cheaper than safer alternatives.

The United Nations has tried to counter these problems with the formation of a multilateral treaty to promote shared responsibilities related to the importation of hazardous chemicals, called the Rotterdam Convention on the Prior Informed Consent Procedure for Certain Hazardous Chemicals and Pesticides in International Trade, which came into force in 2004.

Under the convention, extremely hazardous chemicals and pesticides that have already been banned or severely restricted in various parts of the world are put on a special list by the Chemical Review Committee, the convention’s scientific body. Parties must then first obtain “prior informed consent” of the hazards before they can export these products to another country. The convention also gives countries the right to refuse entry of the hazardous product if they believe they cannot handle it safely.

The convention has its limits, however. Any substance added to the list needs unanimous approval by all members, and if some countries are host to major producers of the product set to be listed, progress stalls. At the last Rotterdam Convention conference in May 2015, key asbestos-exporting countries Russia, Kazakhstan, Kyrgyzstan, Belarus, Pakistan, India, Cuba and Zimbabwe refused to accept the recommendation by the Chemical Review Committee to list chrysotile asbestos, which is carcinogenic. Guatemala, Indonesia and India also blocked the listing of paraquat, an extremely hazardous and highly toxic herbicide that is widely used in parts of those countries.

Baskut Tuncak, UN special rapporteur on toxic wastes, slammed such politicking, saying, “It is both legally and morally unjustifiable for countries to continue to obstruct the listing of asbestos and paraquat under the Rotterdam Convention and derogates from their obligation to realize the right to access information.”

The Rotterdam Convention is not the only attempt the UN has made to encourage companies to act ethically and take responsibility for their actions.

The Guiding Principles on Business and Human Rights—unanimously endorsed by the UN Human Rights Council in 2011—provides a duty for the state to protect against human rights abuses by third parties, including business, and establishes a corporate responsibility to respect human rights. Resting on the three pillars of “protect, respect and remedy,” the principles also provide victims with greater access to effective responses, both judicial and non-judicial. These principles have become widely accepted as “soft law,” meaning that while they are legally unenforceable, they have become the basis for the expected norms upon which companies operate.

John Sherman, general counsel and senior advisor at the nonprofit organization Shift, said companies must be accountable for the impact their practices and products have on people around the world, as well as the actions of their supply chains.

“A lot of legislation that has recently come into force in the United States and European Union—such as anti-bribery, corruption and anti-competition legislation—specifically tries to hold a company to account for the actions of third-party contractors, suppliers and joint venture partnerships that are acting in its name,” he said. “I can see no reason why such concepts are not extended to companies producing and selling substances that are clearly known to be hazardous to health. This is an area that may be ripe for negligence claims for western-based companies in years to come.”
Neil Hodge is a U.K.-based freelance journalist and photographer.