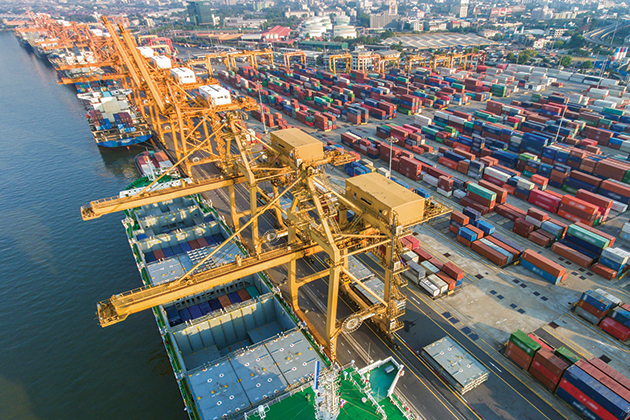 The United Nations Conference on Trade and Development reports that maritime shipping accounts for more than 80% of all international trade. Because the movement of goods is so vital to the global economy, an inflated cargo capacity and the recent bankruptcy of a major shipping line could threaten supply chains and insurance coverage. “If there are problems in the shipping industry, it’s going to have an impact on just about everybody, right down to the guy who’s filling up his car with gasoline,” said Steve Harris, senior vice president at Marsh’s global marine practice. “It is a key indicator of how the economy is faring and it’s not a very healthy industry.”

Since the first mega container ships were delivered in 2010, Harris said, “the industry hasn’t recovered from trying to deal with these huge ships, simply because of the economies of scale.” Just one of these new container ships can carry more than 19,000 20-foot boxes, or TEU (twenty-foot equivalent unit), reducing the cost-effectiveness of one small ship carrying 2,000 or 3,000 boxes. As a result, freight rates have dropped across the board.

“They carry goods much more efficiently and cheaply than all the other ships,” Harris said. “Those megaships have made the whole industry consider how it operates.”

Hanjin Shipping Co. of South Korea, one of the world’s largest shipping lines, was hit hard by these depressed freight rates. As a result, Hanjin declared bankruptcy in August 2016, which was bad timing for retailers preparing for the holidays as the company shipped many products—including electronics, manufactured goods and toys—to the United States for retailers and manufacturers.

Because of uncertainty about the company’s future and fears that its ships could be seized by creditors or that the company would not be able to pay docking fees, ports blocked Hanjin ships from entering, leaving these massive vessels adrift at sea. Ports also turned away outbound containers destined for Hanjin ships, forcing many exporters to locate other containers, rebook their shipments, and repack and transport their cargo.

Since suppliers would not extend credit to Hanjin, business had to be conducted in cash. Cargo owners said rates from South Korea to Los Angeles rose to $2,300 a container, up from $1,700 just days earlier, the Wall Street Journal reported. One U.S. importer said he was getting rate quotes of $2,000 a container, compared to $700 before news of the bankruptcy.

Cargo owners whose merchandise was drifting at sea had to wait—sometimes for weeks—for their cargo to be released. Full resolution took additional time, because while Hanjin had filed for bankruptcy protection in Europe and the United Sates, foreign courts also needed to examine the issue.

Gordon Adams, risk manager at SERVCO Pacific, an automobile dealer that imports new and used vehicles, said the bankruptcy was noteworthy because it involved a major shipping line. “There are a lot of mergers and acquisitions in the industry, but when you’re talking about a major shipper that goes bankrupt, that causes consternation,” he said. “The timing of the bankruptcy put major extra pressure on these vendors because it was the delivery time for all the Christmas gifts,” Adams said. “These goods are mostly made to order. Most companies now operate with just-in-time delivery because they don’t want a large inventory. This made people take notice.”

Joe Walsh, partner at law firm Clyde & Co., said that immediate impacts to a company’s supply chain include the inability to receive cargo shipments on time, lack of information regarding the process for obtaining cargo, having to pay to return empty containers, and demands for additional payments in addition to freight and other port charges.

Although the fiasco knocked the wind out of the shipping industry very quickly, it eventually recovered and replaced the capacity previously shipped by Hanjin. But the bankruptcy was not the only change to come as a result of shipping market conditions. Other shipping companies have chosen to consolidate in response to the reduced rate environment and have formed three massive alliances.

“Because of their size and strength, they will dominate the industry,” Harris said. Given the size of their fleets, these alliances will be able to negotiate port rates all over the world, because ports will no longer be able to negotiate with individual ship owners. “The port managers are going to be weaker in the negotiations when these massive alliances swallow up so much of the world’s capacity,” he said. “The underlying problem, however, still remains that there isn’t enough money in freight rates for operators to see a profit.”

Competition and low rates may seem like a big advantage for those sending and receiving goods, but the ongoing shortfall for operators can cause problems in the long run, especially where supply chains are concerned.

To protect their company and supply chains from events such as those that followed the Hanjin bankruptcy, risk managers should carefully check their policies upon renewal to make sure cargo is covered in such scenarios, Walsh said, “especially in the case of cargo drifting at sea in a container ship that is not able to dock for various reasons.”

In such a situation, there may be extra charges related to unloading and transporting goods that the cargo owner would want reimbursed. “In most circumstances, cargo remains in the same container from loading overseas to delivery in the United States,” he said. “Receivers need a plan in place and should check their policies to make sure that certain self-help remedies—for example, arranging for their own drayage [short distance transport from ship to warehouse]—are covered.”

Adams said risk managers need to be aware of what a standard policy covers and add on to the policy if necessary. He observed that most cargo policies are insured from the seller’s warehouse to the final warehouse of delivery. That includes truck transit, loading, carriage of the product, divergence, moving goods from one vessel to another, and limited warehousing in case storage is necessary.

“It is a pretty encompassing policy and considered to be an all-risks policy, but as everyone knows, all-risk policies don’t cover everything,” Adams said. “The big things it doesn’t cover are delay, loss of market and inherent price if a product is damaged of its own accord. It also doesn’t cover riots, strikes or commotion, or war, which can be bought back in a separate policy.”

Another option is an “open policy,” which covers everything shipped within a certain period of time. Normally an open policy has an annual review, but does not actually expire until one party decides to terminate the agreement. The benefit is that a company can book its own shipments for advantages of cost and coverage.

“If you are a major shipper under this policy, the broker can tailor the coverage to your needs,” Adams said. “The market is very soft right now and you can negotiate additions and corrections to that policy and continue to cut costs. Something that may not be a common occurrence may cost so much on a one-time occurrence that it could make sense to go ahead and include it in your policy.”