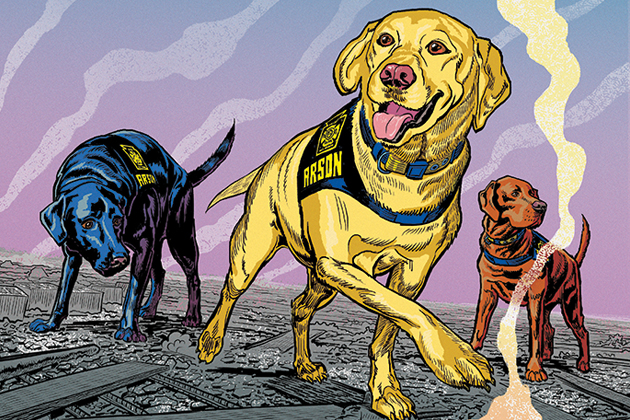 During the spring and summer of 2011, Allentown, Pennsylvania, ­was plagued by fires. Arsonists set fire to vacant row houses at the rate of about one every week-and-a-half, damaging 25 structures in all.

“The community was on edge and the danger to ­firefighters increased because the structural stability of these vacant buildings was not great to begin with,” said Allentown Fire Chief Lee Laubach Jr. The situation was made worse because many of the buildings that were saved were torched again, posing even more danger to firefighters and the community.

Repairs were delayed or not performed because the properties were not sufficiently insured or had been foreclosed upon. “We have a few houses that are still not repaired,” Laubach said.

The situation quickly turned around, however, with a new addition to the fire department: a trained accelerant detection canine named Judge who began working with Laubach. These “arson dogs” are trained to sniff out minute traces of accelerants like gasoline and lighter fluid that may have been used to start a fire. Judge can identify 61 different fire accelerants.

One night at yet another fire scene, Laubach walked Judge through the crowd and the friendly dog quickly became the center of attention. But what the crowd did not know was that this was no mascot—this dog was a trained detective who was able to quickly identify accelerant on one of the onlookers.

“He alerted us about one of the kids’ hands,” Laubach said. “Then it was my job to find out why it was on his hand.” The boy ultimately admitted to the arson and said that he and his friends, ages 12 to 16, had been setting the fires. “They would take gasoline and start a fire in a basement,” Laubach said. “It was really doing a lot of damage. That was probably one of Judge’s biggest cases.”

Arson fires often follow trends in terms of their motives. After the downturn in the economy, for example, there was an uptick in insurance fraud fires because people were financially overextended on their homes or cars. “Then you have the miscellaneous fires set by people with psychological issues—pyromaniacs. They do it for pleasure,” Laubach said. “They are the hardest for us to figure out, because sometimes they use accelerants, sometimes they don’t, and there’s no pattern.”

In one such case, the department had a suspect but, because no accelerants had been used, there was little evidence. “We brought Judge over to him once when he was outside watching a fire, as arsonists are fond of doing,” Laubach said. “It must have scared him—he stopped setting fires after that.”

As word of Judge’s proven detective skills spread, arson cases plummeted. In fact, since 2010, Allentown has seen a reduction of arson cases by more than 50%. Further, because accelerants are being used less frequently, the damage to structures that do burn is less severe, making conditions safer for firefighters.

Other cities in Pennsylvania have taken notice and four more communities now have accelerant detection dogs of their own.

Arson has long been a drain on the insurance industry. “Arson is one of the most difficult crimes to solve because the evidence literally burns up,” said Heather Paul, public affairs specialist at State Farm Insurance. “An estimated 50% of fires are arson.”

According to research by the National Fire Protection Association (NFPA), an average 282,600 intentional fires were reported to U.S. fire departments each year from 2007 to 2011. These fires caused 420 civilian deaths, 1,360 civilian injuries, and $1.3 billion in direct property damage. Nearly two-thirds of the intentional structure fires occurred in occupied structures, while 14% occurred in vacant, unsecured properties and 8% in vacant, secured properties.

In 1992, after a State Farm claims representative observed some of the country’s first arson dogs at work in South Carolina, State Farm set out to create a program to make this training available on a larger scale.

Paul Gallagher, one of the first arson dog trainers, worked through the Maine State Police, so State Farm reached out to the department to initiate a training program. The idea was that arson dogs would “level the playing field between the good guys and the bad guys” by identifying where there may be evidence of an arson, Paul said. But Maine was reluctant to put a “corporate stamp” on the program and turned them down.

After State Farm assured the police that they would have control of the program and get to create a standard and certification for accelerant detection canines, the first training class took place in 1993 under the guidance of the Maine State Criminal Justice Academy. 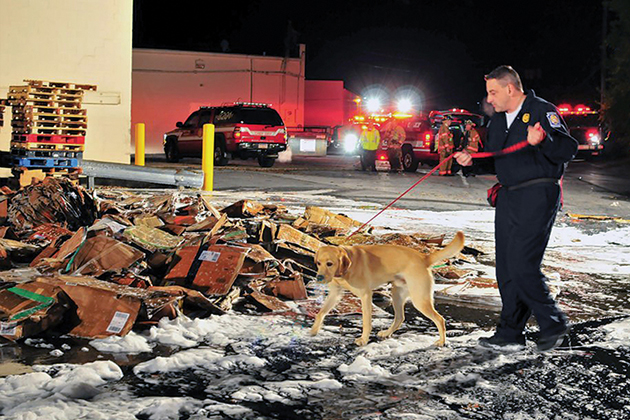 Because many fire departments lack funding or staff for an arson dog, the insurer started a program to provide financial support for the acquisition and training of accelerant detection canines. Once trained, the dogs are required to live with a full-time police officer or firefighter. Since 1993, the State Farm Arson Dog Program has put more than 370 teams of dog and handler to work across the United States and Canada.

For State Farm, the estimated cost of acquiring and training each arson dog, plus travel and lodging for the handler, is $25,000 per team. For police or fire departments, costs associated with the program can range widely. These include veterinary care, food and overtime expenses or bonuses for the investigator or canine handler.

Arson dogs save communities tax dollars by reducing the time required to investigate fire scenes, which can take hours or days for a human investigator, compared to an hour or less for an arson dog team.

The dogs, who are all Labrador retrievers (the preferred breed for arson dogs), are trained to be friendly and responsive. “They fulfill a different role than police dogs, which are used for patrolling and aiding in making arrests,” Laubach said. “These dogs are detectives and investigators. You can also come and see them and pet them, which engages the public.”

Each dog works, lives and retires with its handler. The canine and handler are required to complete 200 hours of training over four to five weeks at a school led by Gallagher, owner and head trainer of Maine Specialty Dogs.

Of vital importance is the trust between the dog and its handler, who learns to interpret the dog’s body language. “Subtle body language can mean they are onto something,” Paul said. For example, at a fire scene, a dog can give a “passive alert” by sitting and pointing its nose toward the area where the odor is strongest. “You may see a dog smell something, take notice of it, realize the smell is getting weaker, and then do a head-snap and come back to the original point,” she said. Odors can also be affected by changes in wind speed and direction and temperature, and can even be buried under as much as a foot under debris making them more difficult to pinpoint.

The federal Bureau of Alcohol, Tobacco, Firearms and Explosives has also offered an accelerant and explosives detection canine program since 1986. The program requires state and local law enforcement and fire service agencies to meet certain criteria and commit to a five-year agreement. Currently, 50 canine teams across the country are participating.

Now that the number of fires has drastically gone down in Allentown, “we have accelerated the other part of our program: education and deterrence,” Laubach said. He and Judge have conducted more than 550 programs at elementary schools and teachers tell him they have never seen the children so engaged with a program before.

Judge’s presence helps break the ice and really drive home the fire-safety message to the students. “They don’t want to light fires because they know the dog is going to come and get them,” he said. “They also listen to the message about safety, like having smoke detectors, and that it’s better to get out of a building when a smoke detector goes off.”

Parents see the dog’s influence on their children as well. One parent reported that his son came home from school and informed them they had to put a smoke detector in each bedroom, Laubach said.

Judge also is an important part of Laubach’s family. Laubach, a dog-lover since childhood, would not have it any other way. “My wife loves him,” he said. “She’s a big supporter and has done a great job of getting him publicity.” She also manages Judge’s Facebook page, which has 1,600 followers so far. 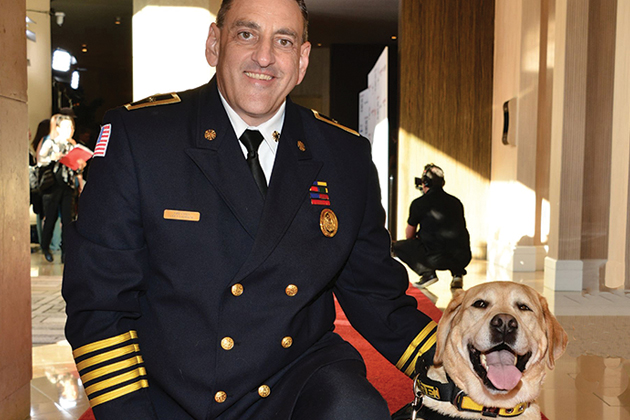 Judge’s accomplishments have not only brought him local notoriety, but national recognition. Last year, he was chosen as a top dog out of 250 accelerant detection canines in the American Humane Hero Dog Awards. The award show, broadcast nationally on the Hallmark Channel, recognizes service dogs in eight categories. As a finalist, Judge earned $2,500 for his designated charity partner, Paws with a Cause, a nonprofit agency that trains assistance dogs for people with disabilities.

The team also appeared on NBC’s Today show, and Laubach has gotten used to his canine partner’s popularity. “Judge is very well known—he outshines me,” Laubach said. “If I go somewhere without him, everyone asks where he is. Even when I go through toll booths, they ask if Judge is in the car.”

The Evolution of Municipal Risk Management