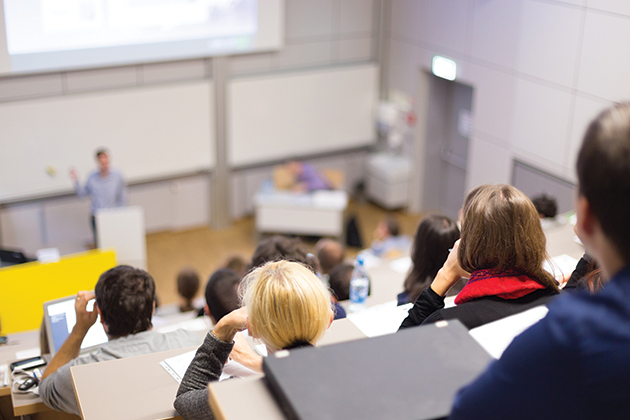 According to the U.S. Bureau of Labor, as workers retire or change jobs, in the next five years alone, the insurance industry will need to replace 104,000 insurance agents, 71,900 claims adjusters, 67,400 claims/policy processing clerks, 28,900 underwriters, 8,500 software developers/programmers, 7,500 computer/information analysts, and 6,900 actuaries.

But with a shortage of skilled workers available to replace them, filling these positions will be challenging for many companies. In order to address this demand, colleges and universities across the country are continually working to expand their program offerings and making greater efforts to ensure that students are qualified for positions when they graduate. But these measures are not always enough.

“If you go to the College Board website, you’ll find there are more than 1,900 accounting programs, about 800 finance programs, and only 82 insurance and risk management programs,” said Zachary Finn, clinical professor and director of the Davey Risk Management and Insurance Program at Butler University. The result, he said, is that there are only about 3,700 graduates each year for 400,000 positions, exacerbating the enormous shortfall of qualified people ready to step in to do the work.

Yet, of those who do find their way into risk management programs, many who graduate are still not hired as risk managers right away because organizations are looking for hands-on experience.

“I was on the student development committee for RIMS, picking Anita Benedetti scholars for 10 years,” Finn said, referring to the RIMS program that sponsors student attendance at the society’s annual conference. “Every year, 40% of those essays would say, ‘I want to be a risk manager, but I can’t get a job as a risk manager, so I’ll be a broker for six years.’ That shouldn’t be the case.”

More than a decade after working as a risk manager for companies like the J.M. Smucker Company and NCR Corporation, Finn decided to address the situation head-on. In 2011, he began teaching at Butler, where he created a new risk management program. He also put together an advisory board comprising members of the insurance industry including insurance brokers Aon and MJ Insurance.

In 2015, Finn and MJ Insurance CEO Michael Bill came up with a way for students to develop some of the knowledge and hands-on experience needed to allow them to start working as risk managers upon graduation—they would set up a working captive insurance company run by students.

A captive presented the perfect training vehicle because it represents “a microcosm of the broader industry and demonstrates the entire product lifecycle for insurance, the operation of an insurance company and alternative means of risk transfer and financing,” Finn said. The MJ Student-Run Insurance Company Ltd. was co-founded with Prof. Kevin Thompson, an attorney and former risk manager for Eli Lilly, and Butler Actuarial Science and Risk Management & Insurance students. Thompson is the captive’s CEO and CFO while Finn is chief risk officer and COO.

“The ‘Captive Insurance Company Operations’ course is an elective at this point, but may eventually become a requirement,” Finn said. “We are still in the testing phase and can run the class three times before the university requires us to formalize the content and structure.”

Setting up the Captive

With a $250,000 gift from MJ Insurance to seed the captive, the students first did their own feasibility study. They then put out a request for proposal, interviewed brokers and chose Aon to manage it. “I thought they did a great job,” said Donald Ortegel, resident managing director at Aon Risk Solutions and a member of Butler’s risk management advisory board. “We had to do a written proposal that was no different from any we’ve participated in, whether it be for a large corporation, a small private company or an institution like Butler.”

Domicile analysis was also an integral part of the setup. Students contacted several domiciles and decided which was most beneficial for their purposes. Ortegel said he was impressed with the students, who were “actually out in front versus just doing work behind the scenes. They were asking questions and getting answers so they could analyze and ultimately make a decision.”

The students narrowed the field to Vermont and Bermuda, ultimately choosing the latter, and received licensing approval from the Bermuda Monetary Authority in April 2017. Jeremy Cox, CEO of the Bermuda Monetary Authority, said he was impressed with the concept of the captive and with the students. “It’s phenomenal,” he said. “It’s a good model that can be used in a lot of different areas. They have learned what different jurisdictions have to offer and they had to learn how to put together an application that could be received favorably and accepted. The process went very smoothly, so they did an exceptional job—and I can tell you, we do turn away applications.”

Cox added, “With this mechanism, you are getting your hands dirty and gaining knowledge. Even for students who don’t end up having a career in insurance or financial services, it is a wonderful exercise, just to educate them about insurance.”

With their analysis complete and all the necessary pieces in place, the students had a single-parent class-one captive ready to go to start insuring the university’s risks.

A big part of the initial challenge was determining what would be covered. The students assessed the school’s risks and decided which would be better served by the captive than by traditional insurance.

“We chose things that we thought would be interesting and marketable, and would advance the mission of the university,” said Brad Weber, one of the students who participated in the project. “Butler is a liberal arts school, so choosing to cover the rare book collection and the planetarium’s telescope was very popular.”

When assessing their risks, the students even discovered a vulnerability to the university’s $2 million telescope—the largest and oldest in Indiana. “When there is even a hint of precipitation in the air, the dome closes to protect it,” Finn explained. For the past 40 years, however, there was no backup plan in case of a power outage. To fully protect the telescope in such an emergency, they decided to install a $2,000 redundant power generator.

To safeguard the school’s rare book collection, they plan to design a database to catalog the books and determine their rarity and value. They also plan to repair leaky pipes that have damaged books in the past.

The students also chose to include coverage for the school’s live mascot, a bulldog named Butler Blue III, otherwise known as Trip, and the campus police dog, Marcus. “We wanted to cover Trip because he will be instrumental in helping us to market the captive,” Weber said. “We added the coverage for Marcus later because, number one, we are doubling our risk pool, and number two, we wanted to support our police force and other police forces.”

To that end, extra money was built into the policy so that, if triggered, it will not only pay out money for the school’s dogs, but will donate funds to a separate police force that is looking to start a K-9 unit. “We were inspired to do this after some of the terror attacks in recent news because making more bomb sniffing dogs available to police departments may help to prevent future attacks,” Weber said.

Coverage will be provided to insure startups formed as part of the business program’s curriculum, where students get a loan from the university to start and run their own business while receiving class credit. The startups were previously put on a commercial general liability policy, but premiums were becoming too high. Looking into the future, he said, the captive could even be used as a vehicle to insure startups outside of Butler too.

While it may take a while to see results from the captive, students have already benefitted from its formation. “Twelve months ago, I had never even heard of a captive, and now I have helped to start one,” Weber said. “The response to our work from the professional community was also very gratifying—even as students, we were taken seriously by everyone we worked with.”

In part because of his experience with the captive, Weber, who graduated in May, was hired as a risk analyst at Moog Inc., a $3 billion manufacturer of control systems for aerospace, defense and other industries located in upstate New York. The job posting he saw asked for one to three years of experience, but he thought he met all of the other requirements. “So I wrote a cover letter, along with a letter of recommendation from Prof. Finn, and told them about my two internships, the classes I had taken and the captive class,” Weber said. “They agreed that I met the requirements and I got my foot in the door.”

Ultimately, the goal is for more students to gain the kind of experience that will increase their chances of being hired as risk managers upon graduation. “Our students, through this program, will graduate with those skills in hand,” said Stephen Standifird, dean of Butler University’s Andre B. Lacy School of Business. “In an industry that is in desperate need of talent, we’ll not only be providing them talent, but talent that is much closer to being job-ready than they’re going to find anywhere else. That’s one of the big motivations for doing this—to give our students a significant advantage going into the workforce.”