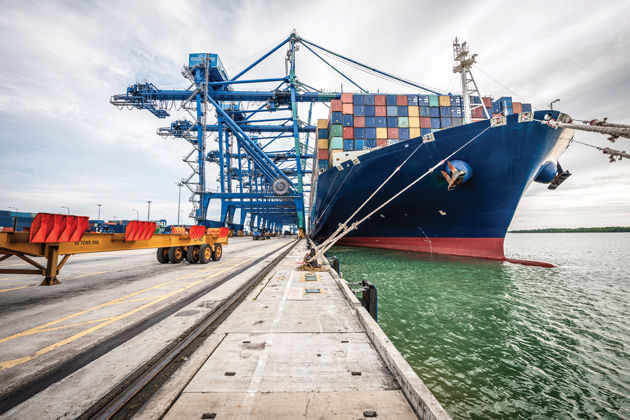 Responsible for carrying 90% of the world’s trade, the shipping industry is the backbone of the global economy. Allianz reports that the international marine cargo industry transports goods with an estimated value of $4.5 trillion annually. Between 1980 and 2016, the deadweight tonnage of container ships—a measure of how much weight a ship carries—grew from 11 million metric tons to 244 million metric tons, and between 2016 and 2019, global container market demand is projected to increase by about 4.7%, according to Statista.

The most common maritime risk management issues have traditionally been relatively predictable: natural disasters, mechanical failures and human error. Now, however, the incredible growth of international trade and the introduction of new technologies mean that shipping industry risks are evolving. The identification and mitigation of these risks is crucial as the successes or failures of the shipping industry can have far-reaching effects on global business. The top risk trends facing the maritime shipping industry in 2018 include:

Large losses from a string of natural catastrophes in 2017 are a reminder that “we cannot overlook the traditional risks that we have faced for generations,” said Capt. Andrew Kinsey, senior marine risk consultant at Allianz Global Corporate & Specialty. “The severity of weather events, for whatever reason, is more pronounced and frequency is increasing.”

The most recent Atlantic hurricane season highlighted this ever-present risk. “This series of storms helped to illustrate the fragile nature of our just-in-time supply lines,” Kinsey said. “Hurricane Irma significantly disrupted gasoline markets in Florida, first by prompting increased demand and then by disrupting the supply chain needed to deliver the fuel. The evacuation of people in anticipation of Hurricane Irma led to higher demand for transportation fuels and created logistical challenges in supplying fuel to Florida that began before the hurricane made landfall.”

Because Florida is largely dependent on marine transport of gasoline from the Gulf Coast, Kinsey said, any disruption to supply sources and shipping routes can affect gasoline markets. When Hurricane Harvey made landfall in Texas, retail gasoline prices in Florida and Miami increased 10 cents and five cents per gallon, respectively, he said.

More recently, severe cold in the northeast United States led to heavy ice conditions, impairing barge deliveries of home heating oil. The cold weather, which extended as far south as the Gulf of Mexico, also resulted in supply shortages around the country and increases in both natural gas and heating oil prices, leading to record energy costs in the first quarter of 2018.

Once seen as a marginal problem for shipping, cyberrisk is now considered one of the top threats, Kinsey said. While computer systems aboard ships are self-contained, they are vulnerable to inside threats, such as disgruntled employees. Hacks from the outside are also possible, as a research team from the University of Texas demonstrated when it hacked a 213-foot yacht in 2013, sending it off course. Then there was the NotPetya cyberattack that hit Danish shipping giant Maersk in June. The crippling attack seized the industry’s attention after it cost the company $200 million to $300 million and led to a temporary shutdown of the largest cargo terminal in the Port of Los Angeles.

“Look at what happened with Maersk,” Kinsey said. “I know how prepared they were for cyber—which was on their radar even in 2006—so for an operation like that to be effectively crippled for two weeks is a wake-up call.” Prior to that incident, “nobody wanted to talk about cyber,” he added. “But that type of exposure is a game-changer. Everything from new bookings to vessel discharge and terminal gate services can be impacted.”

Arctic sea traffic remains limited due to ice conditions, but experts believe that will change. As Arctic ice continues to melt due to climate change, the industry expects that waters will open up, potentially creating permanent northern routes. To date, these routes have been limited primarily to vessels built to cut and move through ice, but a shortcut between Atlantic and Pacific Ocean ports seems increasingly feasible.

Allianz reported that shipping on the Northern Sea route across the top of Russia was up by more than a third last year. Total traffic exceeded seven million tons and is expected to grow tenfold to 75 million tons by 2025. Meanwhile, the Northwest Passage has also seen more activity in recent years.

Some companies are not waiting for routes to open up naturally and have decided to make investments in vessels that can navigate these waters now. “Arctic shipping ties into our changing weather patterns,” Kinsey said. “In the last month there was the launch of the ice-reinforced LNG [liquid natural gas] carrier. When you see vessel operators investing that kind of money in an ice-class gas carrier, this isn’t just a flash in the pan, they’re banking on it—there will be traffic going on that route.”

In a recent white paper, China has also outlined its plans to form an “Arctic Silk Road” through the Northern Sea route that it said would take about 20 days less to travel than the traditional route through the Suez Canal.

Ship data recorders have shown that human error accounts for about 75% to 90% of marine accidents, amounting to more than $1.6 billion in losses, according to Allianz. Numbers like these have spurred interest in autonomous ships that could move cargo more safely. In order for this to work, the industry will need to determine how much human backup would be needed to avoid collisions between manned and unmanned vessels.

While often a topic of discussion, autonomous shipping is likely still some ways off. Crewless ships will no doubt be deployed, but “the jury is still out on whether safety concerns and regulations will clear the way for ocean-going autonomous vessels in the near future,” Kinsey said. Ultimately, he believes technology will support, rather than fully replace, ship crews.

The ICC International Maritime Bureau reported 191 incidences of piracy in 2016, down 22% from 2015 and the lowest total since 1998. In particular, piracy off the coast of Somalia has dropped dramatically, with just two recorded incidents in 2016 compared to 160 five years before. This reduction is attributed to measures used to thwart pirates in the Gulf of Aden and Indian Ocean, including armed guards on-board vessels and patrols by a multinational naval task force. Formed in 2009 to protect global maritime business from pirate attacks in the Gulf of Aden, the task force consists of ships from Australia, Pakistan, South Korea, Turkey, the U.K. and the United States.

The threat of piracy has not been fully contained, however, as it has increased in other areas, including the waters around West Africa, Malaysia and Indonesia. This new piracy, however, is different in that it is focused on armed robbery rather than hijacking, Allianz said.