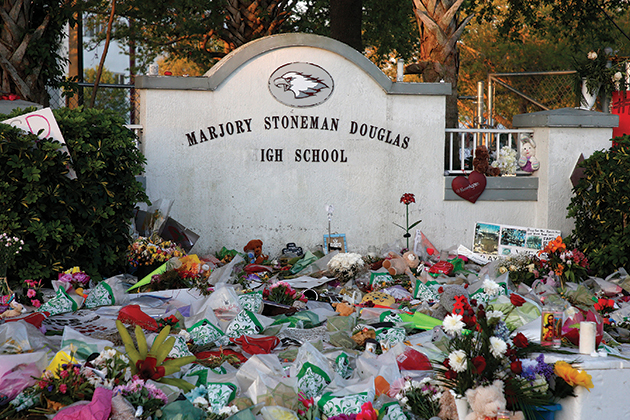 The Feb. 14 shooting at Marjory Stoneman Douglas High School in Parkland, Florida, left 17 dead and 17 injured. The tragedy is yet another reminder that risk managers in any organization, whether public-sector or private, could be impacted by a mass shooting. In fact, the frequency of such events has escalated in recent years—in 2017, the Gun Violence Archive reported 346 mass shootings compared to 270 in 2014. As organizations look to prevent future tragedies, risk managers are facing new challenges.

“This issue of active shooters is not a new one, but recognizing it as a risk management issue is recent,” said Robert Hartwig, clinical associate professor of finance and co-director of the Risk and Uncertainty Management Center at the University of South Carolina’s Darla Moore School of Business.

While many mitigation measures have been discussed by the public and policymakers, companies should be reviewing their insurance options as well. There are a number of insurance products that could come into play after a shooting. Workers compensation policies would cover injured employees, for example, while commercial general liability policies would address claims for bodily injury and property damage suffered by third parties such as customers, visitors and bystanders. A traditional property insurance policy would also provide coverage for physical or property damage or destruction caused by an active shooter. Terrorism insurance could theoretically be triggered under TRIPRA, but a shooting event would have to be certified as an act of terrorism by the U.S.  Secretary of the Treasury and meet a sizable monetary threshold in order for such coverage to kick in. To date, TRIPRA (and TRIA before it) have never been triggered.

Regardless of what policies they have, companies may not be aware of potential gaps in their coverage or that the limits of their coverage are insufficient. “You might have property coverage, but you might not have assessed your properties in specific locations against this type of risk,” Hartwig said. “You almost certainly would not have crisis management under your ordinary property or liability policy. So these represent gaps that, as a risk manager, you might be unaware of.” To eliminate these issues, he recommends risk managers review their current program with their broker.

Beyond property damage, it can be unclear what is covered after a shooting. For example, to what degree does the entity have liability for allowing the assailant on their property in the first place? “Unfortunately, the increase in the number of active shooter situations has probably gotten ahead of the law on this issue,” Hartwig said. “A number of states allow individuals to carry concealed weapons much, if not all, of the time. So it’s not necessarily the case that, just by entering the premises with a weapon, individuals are violating the law. Therefore, a business is not necessarily negligent by allowing an armed individual to enter its premises.”

While an armed individual who begins firing is obviously committing an illegal act, he said, questions still remain about whether the school, hotel, nightclub or other location is in some way negligent for not providing adequate security to prevent a shooting. “That’s where there are differences of opinion and why there are products emerging that would seek to ensure that there are no coverage gaps.”

In recent years, specific products have been created to protect entities against the property and liability risks that might arise from an active shooter incident. Beazley, for example, introduced active shooter insurance in 2015 to cover an organization’s liability for a shooting incident if it is found not to have taken preventative precautions.

Beazley’s policy covers entertainment complexes including hotels and casinos, health care providers, churches and religious institutions, and retail establishments. It also covers one of the largest potential exposures, which is the litigation costs that are almost certain to follow a shooting event. The policy insures for this liability and offers high limits up to $20 million—an increase from $5 million just three years ago. “This may sound like a lot, but look at the Las Vegas shooting, for instance, when 58 people were killed,” Hartwig said. “Some people seek to blame the hotel, alleging they did not provide adequate surveillance of their guests.” Indeed, evolving laws could also shift toward making hotels negligent if they do not inspect their rooms for firearms on a regular basis.

Underwritten by Lloyd’s, the coverage is a standalone policy that began as an active shooter product because it was traditionally focused on an assault with a gun. Since then, however, “it evolved into an active assailant or malicious attack product, which included other types of attack modes as we saw other scenarios, such as trucks being used,” according to Wendy Peters, terrorism insurance practice leader for Willis Towers Watson.

From a risk-transfer perspective, this is usually first-dollar cover, so it is not subject to a deductible. That is a benefit to a number of companies that, on the liability side, “may presently have deductibles that could eradicate the benefit for any protection they may have for a smaller incident,” Peters said. “On the property side, there doesn’t have to be actual damage to your property for this cover to be put in force.”

The coverage was based on what the insurance industry perceived as a need for a consolidated approach and a proactive risk-prevention strategy. “How do you mitigate the exposure, how do you train your personnel, and how do you identify vulnerabilities in your security platforms?” she asked. “Also, ultimately, how do you respond after an event?”

To answer some of those questions, the coverage provides an initial risk assessment of the insured locations, as well as a 24-hour crisis management service to help an insured respond immediately to an incident by setting up an emergency call center, advising on emergency communications, putting in place a recovery plan, and arranging post-event counseling.

The consulting services attached were intended not just as an enhancement to a liability or a property policy, but were meant to add to the services offered. “The idea was to demonstrate that a company, school or hospitality establishment had taken a proactive approach to this risk and had dedicated the resources independently to understanding what they could do to prevent and mitigate this type of an event,” Peters said.

Despite the increasing number of shootings, however, Hartwig pointed out that active shooter insurance is still a limited market. “The vast majority of businesses do not have this coverage, perhaps believing this will not happen to them and that their standard coverages will provide the protection they need,” he said. “At this point, a lot of brokers would probably not be sufficiently versed in this product to be able to articulate what potential gaps might exist and there is always a learning curve.”

But like cyber coverage, insurers and brokers will likely catch on quickly and begin refining their active shooter programs based on market needs. “We are starting to hear rumblings in the marketplace that there is potential for some exclusions to start popping up, just because of the scale of some of these events,” Peters said. “The markets are now looking at it more critically and discretely and trying to understand what the risk potential could be from something like this and we’re seeing that it can be significant.”

How to Respond to an Active Shooter