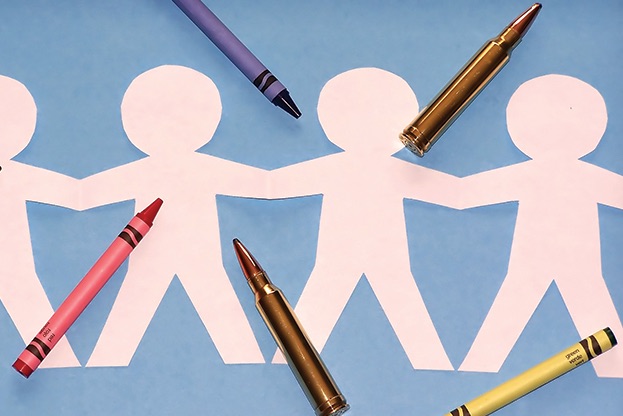 According to Education Week, there were 14 school shootings that resulted in injuries or deaths in the first six months of 2018. these shootings left 32 people dead—26 of whom were students—and 67 injured. Advocacy group Everytown for Gun Safety reports that there have been at least 340 incidents of gunfire on school grounds since 2013, though the group also includes suicides and suicide attempts in which the shooter did not intend to harm anyone else.

In response to this ongoing problem, security experts, lawmakers and educators alike have banded together to try to reduce the risk of injury or death in active shooter situations. From school lockdown drills to ALICE (Alert, Lockdown, Inform, Counter, Evacuate) training to the Federal Bureau of Investigation’s “Run. Hide. Fight.” preparedness campaign, there are many programs in place designed to achieve one goal: keeping people alive.

But even as shooter prevention and response programs proliferate, opinions vary about their effectiveness. According to Greg Crane, founder of ALICE Training Institute, current school response plans sometimes lack flexibility and, as result, give shooters too much time and access to too many targets.

Crane, who works with schools to develop proactive, options-based plans, says the 1999 shooting at Columbine High School, which claimed the lives of 12 students and one teacher, was a prime example of the danger of inflexible plans. As the school’s safety procedures recommended, many of the victims chose to shelter in the library, where they were ultimately killed. But there was another option: “There was a back fire-exit door that they all eventually ran out of after the attack,” Crane said. “You listen to the 9-1-1 call coming out of the library from the teacher and it’s almost four-and-a-half minutes she’s on the call before that library is entered by the shooters. They had a four-and-a-half-minute head start to evacuate that room and that building. But their response protocol was to sit tight and be quiet.”

In Crane’s opinion, while lockdown procedures can be effective in many cases, they are not the best option in every situation. While the teacher did exactly what she was trained to do, sheltering in place was the wrong approach at Columbine.

In fact, it was the Columbine attack that prompted Crane to start ALICE. After his wife, who is a teacher, told him that she was also trained to shelter in place and wait for help in such a scenario, he realized that schools needed to approach the problem differently. “The problem with that as a policy is it doesn’t answer the question for when the environment and circumstances don’t fit that response,” he said. “What if contact is made with the bad guy and I have no door between him and me? Or there’s no lock on my door or we’re in a wide-open space or we’re outside?”

For Crane, giving teachers and administrators other options could be the key to survival. “If I only provide you one option today, that means I have to hope that if you ever find yourself in one of these events, I have some kind of crystal ball and I see that what I told you today is exactly what you need to do then,” he said. “These scenarios, these shooting events, they’re all unique, they’re all dynamic, they’re all chaotic. There’s not a one-size-fits-all plan.”

This is not to say that all experts consider lockdowns to be obsolete. According to Kenneth Trump, president of National School Safety and Service, lockdowns are an effective and sound line of defense, especially in a pre-K to grade 12 setting where options-based training might not be a viable option. Particularly in the younger student population, self-evacuation could put too much responsibility on the students. “We’re asking children to make executive decisions that even adults struggle with,” he said.

While debate over the appropriate strategy continues, Dr. Dewey Cornell, forensic clinical psychologist and professor at the University of Virginia’s Curry School of Education, advocates for early intervention and assessment of potential threats. As director of the University of Virginia Youth Violence Project, Cornell believes that schools have erred in focusing on security measures without the same amount of attention paid to prevention. “They’re in a reactive mode and preparing for violence,” he said. “Certainly, crisis response and crisis response planning is needed, but that’s only one part of the equation.”

He believes schools have largely neglected proactive prevention programs and that prevention needs to begin before there ever is a shooter. “We need to think about who that person is a week before, a month before, a year before, in middle school or elementary school,” he said. “What was going awry then that could have been corrected?”

Cornell is co-author of the Virginia Student Threat Assessment Guidelines, which have been adopted by schools both in the state and nationwide. They are based on an approach to prevention that emphasizes paying early attention to problems such as bullying and teasing before they escalate into violent behavior. The guidelines came in response to 2013 legislation by the Virginia General Assembly establishing threat assessment teams and oversight committees as well as the Virginia Center for School and Campus Safety. Under the guidelines, administrators, mental health professionals and law enforcement officials  are provided assessment tools and mental health and counseling resources for students involved in threat events.

One thing Cornell says the guidelines do not do is promote harsh responses. He believes schools have exacerbated potential crisis situations by adopting zero-tolerance policies that mandate suspension or expulsion for certain types of student misbehavior. He says research has found that suspension as a course of correction actually backfires, and that student behavior is not improved as a result. “Suspending or expelling a student could be a dangerous act,” Cornell said. “We’ve seen in a number of shootings where the student carrying out the shooting had been suspended or expelled from school. This cuts off communication from them and leads to further alienation.”

Instead of suspension and expulsion, Virginia schools are now identifying and resolving thousands of threat situations annually. “What we’ve been able to show is that 99% of these threats are not carried out,” he said. “The less than 1% that have occurred all involved fights with no serious injuries. There have been hundreds of threats to shoot, kill or stab someone that have not been carried out.”

While some states have proposed school threat assessment legislation, most school districts are left to establish their own assessment, prevention and response plans. Monty Giddings, senior vice president and public entity practice leader for CBIZ, recommends school risk management teams establish a three-step process: 1) conduct a complete vulnerability study on each location that reviews the surroundings in addition to the buildings themselves, 2) focus on perimeter control, and 3) educate students on reporting unusual behavior or actions.

First, know the vulnerabilities of each location, including the potential threats posed by neighboring businesses and residents. For example, Giddings said, “If you have a school with a hotel nearby looking down on that school, you’ve got to work with that hotel to know who is staying there.”

Perimeter control measures should be specific to the location and as thorough as possible, given the school’s budget. That could mean funneling traffic through one entrance, installing security cameras, hiring onsite security personnel, or simply having a police car show up on school property at random times throughout the day.

Most important is educating students to report anything that seems unusual or out of the ordinary. “In almost every case, the shooter sent signals prior to the event,” he said “Make sure students are very aware that when they see things on social media that don’t sound right, they need to report that.”

Trump agreed, advocating for the establishment of safe spaces for children to report suspicious activity or behavior. “The number-one way we find out about plots to harm others is through kids who come forward and report to an adult,” he said. “Create a culture and climate where kids feel comfortable reporting something.”

He recommended building a district crisis team with first responders, mental health partners, media, and any other key personnel and performing regular tabletop exercises to play out the hypothetical threat scenarios and devise prevention protocols for classroom settings. In addition, schools should establish police-controlled evacuation plans to be used after the immediate threat has been resolved. “Do you have nearby walking-distance evacuation sites designated? How would you gain access? Do you have parent-student reunification plans? How would you reunify students with their families? What are your plans for media management and public information?” Trump asked.

While the national debate still rages over proposals to arm staff and teachers, Crane believes schools should be arming themselves with knowledge. In his opinion, districts need to empower staff and administrators with options and training to hone quick decision-making skills. Incidents are typically over before law enforcement can be on the scene, so when an incident occurs, he believes the next-best option is to provide students and teachers with information they can use to help themselves. “If I’ve only conditioned the potential target to sit passively on the floor, are they doing things themselves that make the potential for them becoming a statistic more difficult? We’re teaching them to be as easy a target as possible,” he said. “You have to train the brain to make decisions, not just follow the lemming-style thinking.”

Trump advocates for shaking up the usual routine in all forms of drills. “On your fire drills, block an exit,” he said. “Just stand there and when people start coming, tell them they have to go another way—pretend the fire is here. When they’re outside, recall them. See how quickly you can get them back in the building. Do a lockdown during lunch period. Do a lockdown between class changes. Do a lockdown as students arrive in the morning.”

He added, “The first and best line of defense is a well-trained, highly alert staff and student body to a point of reasonableness. Do you have threat assessment team training and protocol in place? If you get a bomb threat or somebody reports a death threat, do you have a multidisciplinary team that can evaluate that threat? How do you handle bomb threats?”

In Cornell’s experience, the most important question is how the district handles children. “I wish that school board members and policymakers would spend more time following a school psychologist, counselor or special ed teacher through their day so they become aware of how many kids we have in our schools who have trauma backgrounds, who have families with substance abuse backgrounds, who have experienced violence, and who have psychological difficulties that interfere with learning,” he said. “If we were providing services to these kids from elementary school on, we could make a huge difference in their outcomes. Most of these kids are not on a pathway to violence.”

Yet progress on such initiatives takes time. “We need mental health services in schools, and we need personnel who can individualize education and can adapt to students with disabilities and different needs,” Cornell said. “That idea has been very slow to take hold.”
Lori Widmer is a Philadelphia-based freelance writer and editor who specializes in risk management and insurance.