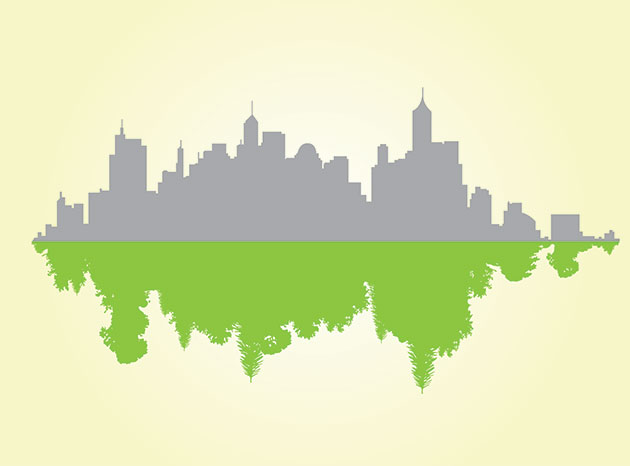 The Bank of America Tower in Midtown Manhattan was designed to be the greenest skyscraper in the world. The mammoth corporate beacon stands at 1,200 feet with 54 floors, 2.1 million square feet and a starting price tag of $1 billion (though the final, adjusted price of construction has never been revealed). In terms of being environmentally friendly, the tower boasts floor-to-ceiling insulating glass to contain heat and maximize natural light, and a greywater system, which captures rainwater for reuse. The building is also made largely of recycled and recyclable materials, and not only is the air intake cleaned (as is the case in most buildings), but the air that is emitted from the building is also purified, which cuts down on harmful CO2 gases that buildings regularly spew into the atmosphere in massive amounts.

With the Bank of America Tower as its emblem, New York is becoming a leader in green construction. But it still lags behind Washington and Oregon, which consistently rank as two of the greenest states. In 2005, Washington state became the first in the United States to enact green building legislation. The law states that all major public agency facilities with a floor area exceeding 5,000 square feet are required to meet or exceed Leadership in Energy and Environmental Design (LEED) standards in construction or renovation.

And going green is not just for major cities like New York, Seattle and Portland. In July of this year, Wilmington, Ohio became one of the first small towns in the United States to pass green building laws. Called the Green Enterprise Zone (GEZ), this legislation codifies a public commitment to stimulate green investment within the town by, among other things, reducing permitting fees for LEED certified construction and renewable energy installations.

There are a total of 14,000 LEED projects throughout the United States and 30 other countries, which represents a clear trend towards the permanency of green construction. And while some companies may see this as a cost-prohibitive future, it may actually be a long-term boon to bottom lines.

Jerry Yudelson of Yudelson Associates, a green building consulting firm, expects this interest in LEED projects to continue. "For commercial buildings, we now have hard data that says that Energy Star and LEED green buildings get higher rents, greater occupancy and better resale value even in the face of an economic downturn," he said. "I see continued growth-probably about 75% growth in new green building projects. I also see tremendous growth in existing buildings."

Even the greenest buildings pose risks. In Marsh's Green Building: Assessing the Risks, 55 construction industry executives said their biggest concern with respect to green building projects was the financial aspect of the process. The extra cost of the initial investment to construct a green building may prove too expensive for many companies in an economic downturn, as detractors are quick to point out.

James S. Russell, architecture critic for Bloomberg, sees the Bank of America tower as a "monument to bonus-coddled, overindulgent, corporate excess-if it weren't so dumpy," as he wrote in a column. "Worse, it's gracelessly, earnestly green." He finds fault with the designer, Cook+Fox Architects, who tout it as "the world's most environmentally responsible high-rise office building." Russell feels that is an overstatement, pointing out that eco-buildings have moved far beyond the design that Bank of America has implemented.

"Roll the clock back two years and everybody had a tremendous fascination with their carbon footprint," said Stephen Clarke, assistant vice president of ISO's commercial multi-line division. "You couldn't turn to any internet site, news article or even cocktail party chatter without hearing, 'What are you doing to reduce your carbon footprint?'"

In that environment, there was a definite momentum spurring more companies to go green with construction. Whether or not that holds through the downturn is yet to be seen.

"I think the current economic condition has dampened some of that discussion, but it's there and it's only going to become more prevalent," said Clarke. "It's going to start to affect everything we do as far as rebuilding and even day-to-day operations."

The Risks of Building Green

Even if building green can thrive in times of economic uncertainty, there are legal issues that builders, building owners and occupants must worry about. As the understanding of building green continues to evolve, so does the act of determining an appropriate standard of care.

The Marsh study expressed concerns that there are evolving business codes, mandates and other rules associated with green buildings that could result in liabilities. "From a governmental standpoint, you have risks related to passing laws to mandate green building practices, and we've seen lawsuits against certain municipalities over the past couple of years that were related to this," said Shari Shapiro, a LEED accredited attorney for the Philadelphia-based law firm Obermayer Rebmann Maxwell & Hippel LLP.

Lawsuits can also stem from the failure of a building to meet LEED requirements, as was the case in Shaw Development v. Southern Builders, a case billed as the first green building litigation. The dispute began when the developer of a Maryland condominium project sued the contractor for an alleged failure to construct the building in accordance with LEED requirements. This meant the developer would lose out on the expected tax benefits ($635,000) afforded by the Maryland Energy Administration, which, like many state-run agencies, grants tax credits to companies that undertake energy efficient projects.

There is also a certain level of expectation in terms of green building performance. But because of their relatively young age, there is a lack of knowledge about the long-term performance of such structures, which means there is no way to accurately determine their return on investment just yet.

Performance risks include uncertainty surrounding the longevity and warranty of new products, the use of untested materials, and the impact of post-construction build-out, or finishings, on sustainability. This ignorance can, in turn, lead to lenders and financial markets shunning the unknown.

Questions also remain about the supposed financial savings associated with green buildings. The U.S. Green Building Council conducted research into the matter, eventually finding that a quarter of the new buildings that have been certified do not save as much energy as the designs had predicted.

"From an owner's perspective, there are risks related to promises and representations that you're making to your tenants and your investors about the nature of the buildings that you are either leasing or investing in," said Shapiro. "And sometimes these promises are not kept."

Along with performance risk, there is also construction risk due to the lack of operational standards for new construction and the worry that such aggressive design may leave less room for error. And if this was not troubling enough, other legal risks include untested contract language, the reluctance of parties to share risk and concerns about whether contractors are taking on design responsibility not covered by insurance.

With so many potential risks, how do builders meet the demand of the environmentally conscious public without falling victim to the hazards of going green? For possible solutions, some development firms are turning to insurance and surety. But the question remains as to whether builders can obtain insurance solutions at a fair price-or whether insurers are willing to offer coverage at all.

One coverage option was introduced recently by ISO for commercial property owners interested in rebuilding damaged property with green alternatives. "Our intent was to tap into the desire of people to begin building green or rebuilding green," said Clarke. "This kind of lines up existing coverage provisions with that type of desire."

ISO's form coverage consists of three major components. The first is green upgrade coverage, which will augment existing replacement-cost coverage by providing an additional limit of insurance to address loss settlement of damaged property using more energy efficient, environmentally friendly materials, such as LEED or Energy Star. The second component is related expense coverage, which provides an additional limit of insurance to be applied to expenses related to green upgrades (such as the reuse or salvage of building materials). The last component offers a business interruption option for those insureds with an underlying time-element that extends the period of restoration. This is put in place because reconstruction using green standards may take longer than traditional reconstruction.

AIG joined the sector in a unique way recently by offering green reputation coverage, issued by AIG's risk management arm, a unit of its commercial insurance division. The policy provides up to $50,000 in coverage, per occurrence, for crisis management consultant costs that may arise from a reputational crisis when a green building experiences adverse publicity.

Clients may also insure the performance of a green building by investing in surety. As with other means of transferring risk in green construction, however, issuers of surety are skeptical about the onerous contract provisions and the risk of guaranteeing a specific performance for energy usage.

The future of building green may see government backing. The Waxman-Markey energy bill has the potential to act as an accelerant to the construction phenomena. The bill, which has passed in the House and is currently awaiting Senate approval as of this writing, aims to reduce global warming pollution, create clean energy jobs, achieve energy independence, and transition the United States towards a clean energy economy.

"Even if the Waxman-Markey energy bill doesn't pass as a package, I think you're going to see federal energy efficiency code legislation-and that's going to change the landscape dramatically because, to date, energy efficiency codes and building codes have been a state and local responsibility, not federally mandated," said Shapiro. "Even if you don't see federal legislation, you're going to see major building code changes in the near future."

With or without enforcement from the government, a more pronounced lean towards green is likely to occur-and for some, it is a welcome change. According to research firm McKinsey & Company, the U.S. economy has the potential to "reduce nontransportation energy consumption by roughly 23% by 2020, eliminating more than $1.2 trillion in waste."

It has yet to be seen how efficient green buildings really are, since most are too young for long-term reporting. Will building green single-handedly save the planet? Probably not, but one thing many agree on is that it is a move in the right direction-a move that requires the evaluation of many hidden factors.
Emily Holbrook is the founder of Red Label Writing, LLC, a writing, editing and content strategy firm catering to insurance and risk management businesses and publications, and a former editor of Risk Management.