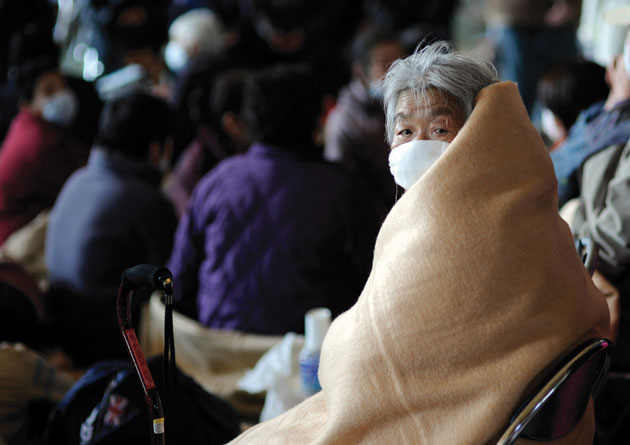 Perhaps the most unique and troubling element of Japan's post-earthquake crisis has arisen from the damage done to the Fukushima Daiichi nuclear power plant. While some were quick to criticize plant owners and the country in general for irresponsibly building a nuclear plant in a high-risk zone, the outcry was largely unwarranted as the quake and subsequent tsunami represented an unprecedented series of events.

Initially, the plant's safeguards operated correctly. After the quake hit, the reactors automatically shut down and when the plant lost electric power, emergency generators kicked in to keep the reactors cool. Soon after, however, 30-foot tsunami waves swamped protective seawalls, flooded the plant and damaged the diesel-powered generators. Without adequate cooling, the reactor cores started to overheat, eventually causing explosions and further damage to four of the six reactors at the plant. While workers frantically tried to prevent a catastrophic meltdown and gain control of the situation, authorities in Japan and around the world worried about the harmful radiation escaping from the damaged reactors. This terrifying chain reaction of events has brought the concept of nuclear safety to the forefront of worldwide debate.

One concern has centered on the design of the Fukushima Daiichi reactors themselves. This 40-year-old General Electric Mark 1 design is what is known as a boiling water reactor. Within, nuclear reactions in uranium or plutonium fuel rods heat water to boiling temperatures and the resulting steam powers turbines that run generators to create electricity. The steam is then condensed back into water that is cooled by seawater before returning to the system. Spent fuel rods are stored in pools in the reactor building for up to 10 years until they are cool enough to transfer to long-term storage. The system remains stable as long as this coolant loop keeps working, but if the pumps that circulate the water malfunction and the fuel rods are allowed to heat unabated, it can lead to explosions, fires and possibly partial or total meltdown. As far back as the early 1970s, critics questioned the Mark 1 design for what they considered to be an inadequate containment system. And as evidenced by the explosions in the Fukushima Daiichi reactors, those fears have been realized.

Newer reactor models do not have the same weakness, but out of 104 operational nuclear reactors in the United States, 23 are Mark 1 reactors, including one in Vermont that was built in 1973 and had its license extended for another 20 years soon after the Japanese disaster. GE defended the model, pointing out that all Mark 1 reactors have been retrofitted with safety improvements over the years and have decades-long track records of safety and reliability.

To help gauge the risk to the nation's plants, various congressional leaders have called for hearings into the safety and preparedness of U.S. nuclear facilities. Other groups have asked for a halt on the relicensing of nuclear power plants, pending further evaluation. The Nuclear Regulatory Commission (NRC) has pledged to review its policies, but it has also vouched for the safety of America's nuclear reactors. "U.S. nuclear power plants are built to withstand environmental hazards, including earthquakes and tsunamis," said NRC Chairman Gregory Jaczko in a statement to Congress following the disaster. "Even those plants located outside of areas with extensive seismic activity are designed for safety in the event of such a natural disaster."

Global concerns remain as well. European Union officials have agreed to stress test their existing nuclear plants and officials in Germany have pulled back on a plan to extend the life of its nation's nuclear plants, shutting down seven of its oldest reactors while considering what to do with the 10 others still operational in the country.

Nuclear power has always created a sense of unease. But in recent years, it has become more widely accepted as fossil fuels become more expensive. Nuclear power generates 14% of the world's electricity and 20% in the United States. (France is the world leader with reactors supplying 75% of its electricity. Japan uses nuclear reactors for 29% of its power.) Thankfully, major accidents are extremely rare. But in the wake of the Japanese disaster, the future of nuclear power is once again uncertain.

In the Wake of the Quake: A Supply Chain Unlinked

In the Wake of the Quake: Building Code Lessons