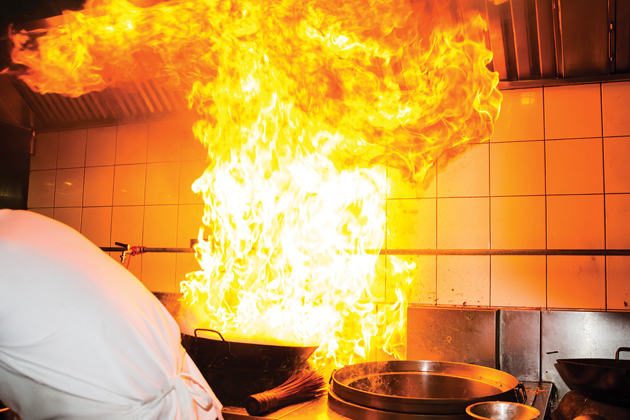 On the morning of June 21—Father’s Day—kitchen workers were preparing for a busy day at a national Italian restaurant chain when, just before opening, a fire broke out on the roof. The blaze resulted in damages estimated between $75,000 and $100,000, and the restaurant had to close for several days. Reports suggest that the fire started when creosote in the exhaust duct above a wood-fired brick pizza oven ignited. Since this type of masonry oven does not require installation of a fire suppression system, the fire likely spread to the roof because the duct did not contain the fire and there was insufficient clearance between it and combustible roof materials.

Like cooking grease, creosote is a common cause of fires in restaurants that cook with solid fuel. This black, tarry material is the by-product of wood combustion in wood-fueled charbroilers, barbeque pits, rotisseries, brick and hearth ovens, and smokers. Cooking with solid fuel, like wood, produces creosote and deposits this highly combustible material in exhaust hoods and ducts, where its low flash point and auto-ignition temperatures can create a fire hazard. As more restaurant operators add “live-fire” cooking for flavoring, the risk has increased.

The danger is often compounded by the inability of conventional fire suppression systems to reliably detect and extinguish solid-fuel cooking fires. Detection devices for conventional fire suppression systems were first developed decades ago. Detection and system activation is typically initiated by one or more fusible links assemblies. Each assembly consists of two small metal plates that are held together by solder that melts at a specific temperature. These assemblies are connected to the suppression system’s release mechanism by tensioned cables. When the rated temperature is reached, the links are designed to separate, allowing the cable to relax and activate the system. Liquid chemical suppressant is then discharged through piping and multiple nozzles.

Unfortunately, many reports of fires from solid-fuel cooking confirm that the fusible links located at duct entrances are not reliably activating suppression systems, especially with fires that ignite in upper portions of ducts. Sometimes the links fail to separate because they are coated with hardened grease deposits. In other cases, fires move past the fusible links faster than the links can respond. A fire can advance very quickly in an exhaust stream—with a typical duct velocity of 1,500 feet per minute in a 15-foot long duct, it takes only six-tenths of a second for a fire to travel in the exhaust stream from the fusible links in a duct opening to the exhaust fan inlet. A robust creosote fire might travel even faster.

In addition, the codes and standards requiring water-based fire suppression systems for solid-fuel cooking do not include a minimum time for the systems to expel suppressant. Conventional fixed-tank systems only spray suppressant for about one minute or less, which is often not long enough to put out solid-fuel cooking fires.

To combat the risk of solid-fuel fires, there are newer fire suppression systems that provide virtually unlimited water. Enhanced conventional systems, for example, dispense liquid chemical suppressant for about one minute, as usual. Thereafter, a valve opens to dispense unlimited water through the conventional suppression system piping and nozzles. But these systems are still constrained by the use of fusible links for detection.

The latest fire suppression system technology, however, incorporates several new advancements, such as electronic detection, operation and continuous system monitoring, a backup power supply, and optional network communications. Suppression is provided by unlimited water with an added surfactant to “make water wetter.” These systems also automatically clean the hood and the lower duct daily with hot water and surfactant.

These systems generate a shielding mist of water droplets that deposit on surfaces coated with grease or creosote, quickly forming a thermal blanket to limit fuel surface temperatures. This helps to rapidly extinguish the fire and eliminate its spread. As the water droplets vaporize, the increase in water vapor volume displaces air and the oxygen it contains, further suppressing combustion. The surfactant provides improved surface-wetting to increase the effectiveness of the water.

Duct construction presents a challenge for fire suppression as well. Ducts for grease vapor and smoke emissions are often built on-site, but do not always comply with applicable codes and standards for materials, welding, connections, slope, drains, cleaning access and clearance to combustibles. Instead, designers should specify factory-built, UL-listed ducts as a minimum requirement for solid-fuel cooking exhaust systems, if not all exhaust systems.

Fires also cause major damage because of insufficient clearance to combustibles. Ensuring that metal construction components such as joists, studs and trusses be used within 18 inches of appliances, hoods and ducts is another simple solution to limit the potential damage of a solid-fuel cooking fire.
Doug Horton, CFSP, is principal consultant at D. J. HORTON and Associates, Inc., where he specializes in commercial kitchen ventilation issues, including fire analysis.