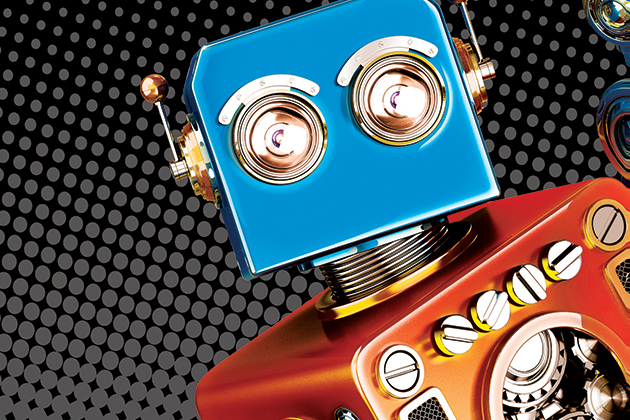 Empowered with improved sight, mobility, dexterity and, in some instances, artificial intelligence and self-learning capability, new robots are coming to workplaces everywhere. They are not just showing up in warehouses and factories but increasingly, they are also assisting workers in hospitals, hotels, airports and retail shops to lift and transport objects, perform precise surgical procedures, or observe, collect and analyze data for security and safety efforts.

Better equipped than their predecessors in terms of sensing and mobility, these robots can assist in dangerous settings or disaster sites where the risk of physical injury to human workers is high. In such instances, robots are fearless and welcome search and rescue partners.

The Third Stage of Robotics

According to Professor Henrik Christensen, executive director of the Institute for Robotics & Intelligent Machines at the Georgia Institute of Technology, this new wave of collaborative robots represents the third stage of robot innovation, which will allow for a wider range of work-sharing experiences between humans and robots.

The first wave of robotics, which was introduced more than five decades ago, was about mechanization on the factory floor and “getting the job done,” he said, while the second wave was about making robots easier to program. They were able to perform simple, repetitive tasks, but were unaware of their surroundings and were costly to acquire.

Part of the excitement for the latest wave of robots stems from the addition of artificial intelligence, advanced sensing skills and self-learning capabilities—known as deep learning—that are helping to make robots smarter, safer and more like humans. Unlike the industrial and service robots of previous decades that were walled off from human contact—often enclosed in cages and tethered to ensure the safety of human workers—the latest robots have a greater awareness of their surroundings and are far more dexterous and versatile, allowing for more human interaction.

These collaborative robots, sometimes called “cobots,” also tend to be made with softer materials like plastics, and pose less of a hazard to humans. In the industrial sector, factory robots are designed to comply with ISO 10218 and ISO 15066 standards, which cover safety requirements for industrial robots and collaborative robots, respectively. These requirements ensure the machines have minimal protrusions, pinch points and sharp edges to reduce the risk of impact and can slow down or stop operations when in very close proximity to humans.

Many of the newest robots are also considerably less expensive than traditional, stationary robots. A research report from asset management firm Piper Jaffrey estimates that, while stationary factory robots can cost anywhere from $100,000 to $500,000, collaborative robots are priced anywhere from $20,000 to $50,000 apiece, with prices dropping even further as time goes by. “We’re approaching the point where working with a robot will be just like having a hammer or a drill to help you complete a task,” Christensen said.

Robots can also help to dramatically lower production costs by reducing the number of people required to do a job. For example, at a Dynamics Group factory in Minneapolis, Universal Robots’ robotic arm is reportedly able to produce four times as many plastic parts as three workers.

An Appetite for Advancement

A confluence of factors have helped bring about this new age of robotics development, chief among them being the availability of cheaper, more powerful electronics and hardware.

“The reduced cost and size of sensors, increased processing power in computers, advances in programming languages, and new interfaces, that make it easier for people to manage robots, are all making these devices safer, cheaper, faster and better,” said Rob Nail, CEO and associate founder at Singularity University, a Silicon Valley-based organization that educates corporate executives on technological innovation.

The widespread use of GPS technology and accelerometers that determine device direction, as well as some of the capabilities that have come out of the worlds of video and online gaming, have also played a role. “Today, robots of all types make use of technology that was originally developed for video games, in particular, Microsoft Kinect [a motion-sensing video game peripheral],” Kara said.

In addition to the contributions of technology and robotics firms, consumer-focused businesses such as Amazon, Apple and Google have spurred further improvements by purchasing robotics companies and incorporating new technology in their warehouses, factory floors and specialized robotics divisions that focus on specific technology like self-driving cars and drones.

“Google gets a lot of the credit for many of the innovations we see in robotics today,” said David Bourne, principal systems scientist at Carnegie Mellon University’s Robotics Institute. In particular, Bourne noted, they are responsible for advances related to computer vision and robots’ ability to correctly interpret what they see.

Other elements that have been critical for robotic advances are capabilities associated with big data, cloud computing, 3D manufacturing and the development of open-source hardware to facilitate robotic construction.

“Due to the proliferation of open-source software and modular hardware, you don’t have to be in a specialized industrial facility or university research lab anymore to start building robots,” said Vikram Kapila, professor of mechanical and aerospace engineering at New York University’s Tandon School of Engineering. “People can actually tinker in robotics without breaking the bank and without having to come up with the same solutions over and over again. You can now use standardized robot-building solutions.”

Among open-source systems or building modules for robotics development are the Robotic Operating System or ROS, overseen by the Open Source Robotics Foundation and HEBI Robotics, a firm founded by robotics experts at Carnegie Mellon University that provides building blocks called “actuators” that can be configured to build custom robots that can be controlled by a smartphone or tablet computer.

Playground Global, a company founded by Andy Rubin, the former head of robotics at Google and the developer of the Android operating system, is also developing robotic building blocks. Playground is investing in startups like Nauto, a safety system and data collection device for cars, that can help to speed up the development of robotics and artificially intelligent machines. 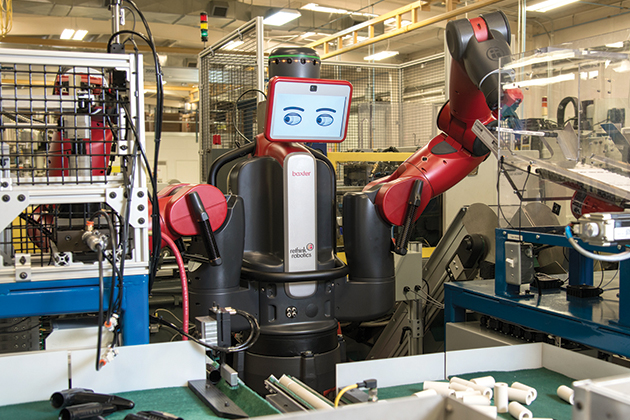 There is also a whole new universe of “wearable” or exoskeleton robotics that allow people to increase their strength and mobility. And many new robots can be trained to do precision work simply by demonstrating the process to them, rather than requiring programming, which opens the use of robots to a wider market.

Not surprisingly, the robotics market is growing at a compound rate of 17% per year, according to research group IDC and Bank of America. Merrill Lynch has forecast a $153 billion robot and AI market by 2020.

The biggest robotic growth is happening in Asia, where China and Japan are focused on automating more of their manufacturing processes, aiming for “dark factories” with no human presence. Currently, Asia accounts for 69% of all spending on robotics.

Risks of a Robotic World

So what will be the end result of all this robotic activity?

One example comes from robot maker Fanuc, which provides robots for Apple and Tesla Motors to use in making electric cars. This April, Fanuc introduced a new program in which all robots acquired by a client can be connected via one network, facilitating the full automation of a factory and allowing for greater utilization of big data to optimize robot performance. In addition, instead of programming individual robots, any necessary applications can be downloaded for the entire system just like you would download smartphone apps. The robots, powered with sensors and artificial intelligence, now have the ability to observe, analyze and optimize their own performance and anticipate when something is amiss or needs to be replaced or repaired. The entire robot team also has the ability to learn from individual robot actions, errors or improvements.

Cisco Systems and Rockwell Automation are partners with Fanuc in this project, helping to build the network platform and providing network security. Machine-learning startup Preferred Networks, based in Japan, is providing AI expertise.

“We believe this will be the de facto standard for factories around the world,” Fanuc CEO Yoshiharu Inaba said when he announced the new initiative.

While many view injecting artificial intelligence, self-learning skills and big data capabilities into network-connected robots as a welcome advance, others have expressed concerns about potential risks and problems that could ensue.

“The biggest risk is cybersecurity—making sure that all these new systems are safe and that people cannot hack into them,” Christensen said. While he believes that the robotics industry is safety-conscious, as robots meld with other emerging technologies and platforms such as the internet of things, he fears security lapses.

When it comes to collaborative robots, Bourne said that “safety standards are nascent at this stage and we still have to make it so that you truly can have robots and people working together safely.” Douglas Peterson, general manager at Universal Robots, pointed out that, while cobots are inherently safe, any modifications or additions to that cobot may not be. “Once we have a dangerous tool at the end of it, it is then the application that has to be deemed safe,” he said. Testing must be a priority.

Still others express concerns about a growing robotics market and its impact on society at large. “Every physical task will be an opportunity for robotics,” Nail said. “But are we prepared for that?”

Experts believe we will also need to consider the implications of robotics on employment. Projections about this impact vary. In its report Future of Jobs, 2025: Working Side by Side with Robots, Forrester Research predicts that automation will result in 22.7 million jobs lost by 2025, 13.6 million new jobs created, and that 25% of all jobs will be transformed. Academics at Oxford University have predicted that 47% of U.S. jobs will be susceptible to automation over the next two decades.

New research conducted by the Centre for European Economic Research says that many jobs that could be automated but also involve face-to-face interactions—tasks that robots do not excel at—are not at risk, and thus only 9% of jobs are at high risk of automation.

Whatever the precise impact on employment, some are now calling for businesses to establish robotics risk frameworks and to hire chief robotics officers to help guide the development and deployment of their robotics strategies.

For example, Vasant Dhar, professor of information systems at New York University’s Stern School of Business, has developed a “Decision Automation Map” to help mangers, regulators and policymakers determine which activities can be safely delegated to AI-powered machines and which ones should be retained by humans.

“Currently, there is no framework out there that helps an enterprise come up with a robotics automation strategy,” he said. “Most efforts are pretty ad hoc.  They may focus on the wrong problem or have wrong expectations.” He advises firms assessing their automation needs to examine the predictability of a given task or problem versus the cost per error. Errors in robotic health care, for example, can have significant costs, whereas automated advertisement purchasing would have low costs per error. “Changes in predictability and cost per error can nudge a problem in or out of the robot zone,” he said.

No matter the risk, some look at the rise of robots in the workplace as an intellectual challenge. “We are going to see all the dirty, dull and dangerous jobs go away, replaced by many different kinds of new jobs,” Christensen said. “And it’s going to require lifelong learning for all of us in order to keep up.”
Katherine Heires is a freelance business journalist and founder of MediaKat LLC.