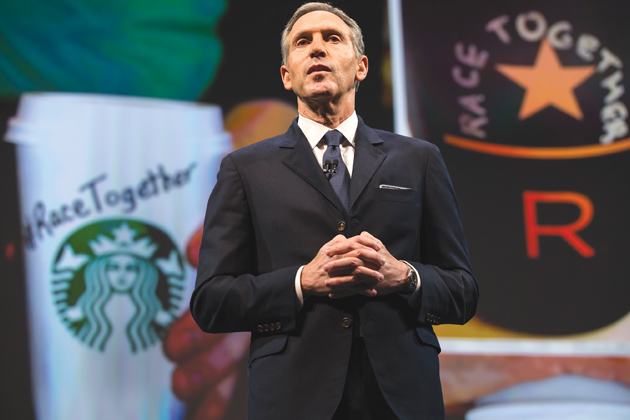 When Starbucks revealed its Race Together initiative in March, in which the coffee chain encouraged its baristas to engage customers in discussions about racial inequality, I instantly knew that the policy would be fodder for a column. My problem was that, given our publishing lead-time, I would be writing about it at least a month before you would read it, and there was almost no way such an obviously ill-conceived idea would last that long. Sure enough, after a week of public criticism, Starbucks ended that element of the campaign. Although the company insisted that it was not a change in course, it seemed pretty likely that public pressure forced their hand.

This is not to say that Starbucks’ heart wasn’t in the right place—racism is an insidious and often dangerous problem in our society and it certainly merits thoughtful discussion. But mandating that your employees initiate such a serious conversation while preparing their customers’ morning coffee does not seem to be the most appropriate way to address the issue.

More than that, the real question is how such an initiative got so far without someone in the Starbucks hierarchy stepping in. As an outside observer, I was immediately able to recognize that this policy was so doomed that it wouldn’t even last the month it would take me to publish my thoughts about it. Virtually the entire internet registered its skepticism just as quickly. It is a mystery why no one at Starbucks had a similar reaction.

Of course, Starbucks isn’t alone in making inexplicable business decisions that should have been shot down long before they became public. Movie producers seem especially prone to bad ideas like this, particularly when it comes to green-lighting multi-million-dollar sequels that no one asked for, like, say, Caddyshack II, Basic Instinct 2, Blues Brothers 2000 or Dumb and Dumberer.

In the business world, Coca-Cola’s New Coke fiasco in the 1980s is probably the archetypal case of this kind of mistake, but there are others. In 2003, for example, Red Lobster debuted an “all-you-can-eat” snow crab leg promotion that cost the company more than $3 million in lost revenue after they failed to take into account the vastness of American appetites. Last year, Wal-Mart raised eyebrows when it made the awkward announcement that it would hold a holiday food drive for its own employees, essentially admitting that it wasn’t paying its employees enough to live on.

Unsurprisingly, social media has provided yet another forum for these corporate missteps. McDonald’s, JPMorgan and the NYPD have all recently seen well-meaning Twitter campaigns inundated by negative comments as users hijacked promotional corporate hashtags to publicize instances of food poisoning, greed and police brutality. It was as if their social media directors had never seen the internet before.

The common element in each of these cases is that the companies in question all demonstrated a complete lack of awareness of public sentiment and were somehow unwilling or unable to think critically. Instead, employees adopted the role of “yes-men,” willing to agree to any idea, regardless of its actual merit.

So how do we stop getting blindsided by these obvious risks? For one, companies could actually listen to their risk managers. Or maybe it’s time to hire a “no-man” whose only job is to search for and point out the stupidity of any corporate decision. Kind of like a professional heckler, if you will. In the snarky world of internet critics, it shouldn’t be too hard to find good candidates for the position. Then, hopefully, companies will stop making fools of themselves and we can all go back to just drinking our coffee.