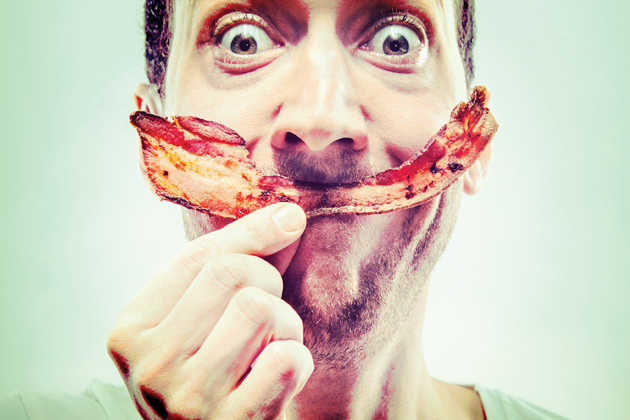 I like bacon as much as the next person. In fact, I have a long-standing pact with myself that if ever see “a pound o’ bacon” on a restaurant menu, I will order it immediately. I don’t think it exists, although friends have remarked that in certain eateries—your greasy-spoon diners, for instance—I could probably just order a pound of bacon and be done with it. I insist, however, that it has to be an actual menu item and it has to include the o’. After all, a man has to have standards for his imaginary food choices.

That said, I don’t consider myself part of the Cult of Bacon that, over the past few years, has elevated our tasty little breakfast staple to the Greatest Food In The History Of The World. It isn’t even enough just to eat it anymore. If the internet was a food, that food would be bacon. You can find bacon neckties, bacon lip balm, bacon toothpaste, bacon sunscreen, bacon air fresheners, and the list goes on. I even got a package of bacon bandages as a gift, and let me tell you, my paper cuts never looked so delicious. Bacon has become a lifestyle.

This is why the internet was even more outraged than usual when the World Health Organization recently reported that eating bacon and other processed meats could lead to cancer. They even classified it as a Group 1 carcinogen—the same as smoking and asbestos.

Of course, the headlines were a bit misleading. The WHO classifications gauge whether or not something has a definitive link to cancer, not how much of a risk that something actually poses. It then becomes a question of proportion. Regular consumption of processed meats increases your risk of colorectal cancer by 18%, while smoking increases your risk of lung cancer by 2,500%. To put it another way, the average person has a 5% chance of getting colorectal cancer in their lifetime. Eating a couple strips of bacon a day raises that risk by 18%, giving you a 6% overall risk. This is not to say that the threat is inconsequential—34,000 cancer deaths a year worldwide can be attributed to diets high in processed meats. But cancer from smoking kills one million, so bacon isn’t quite as dangerous as the initial headlines would have you believe.

The same analysis can be applied to another recent headline proclaiming that selfies killed more people this year than sharks. Now, a part of me wants this to be true: Sharks are everyone’s favorite predator and selfies are one of the more ridiculous trends of recent years. (I mean, you can’t even look through anyone’s vacation photos anymore without their giant heads dominating the foreground of every image, but I digress.) So put sharks and selfies together and you have my attention.

But when you look more closely at the data, a different picture emerges. A lot of these so-called selfie deaths can be blamed more on stupidity or carelessness than photography. For example, two men died after they pulled the pin from a live grenade while taking a selfie. Another group died after getting hit by a train while taking a selfie on the tracks. One man tried to take a selfie while running with the bulls in Spain and was gored. Clearly, the cause of death was not the selfies but exploding hand grenades, oncoming trains and angry bulls. Again, not as interesting.

These particular stories, and others like them, illustrate the dangers of taking shortcuts when trying to determine what is and isn’t threatening. We’re exposed to a lot of information these days, so it is tempting to let the headlines do our thinking for us. But a headline—especially if it is about bacon or sharks—is only meant to grab a reader’s attention, not be a shortcut for an actual risk assessment. It’s always better to be a little skeptical and dig deeper to get the full picture of the risk. After all, those wacky editors can write just about anything for a headline...