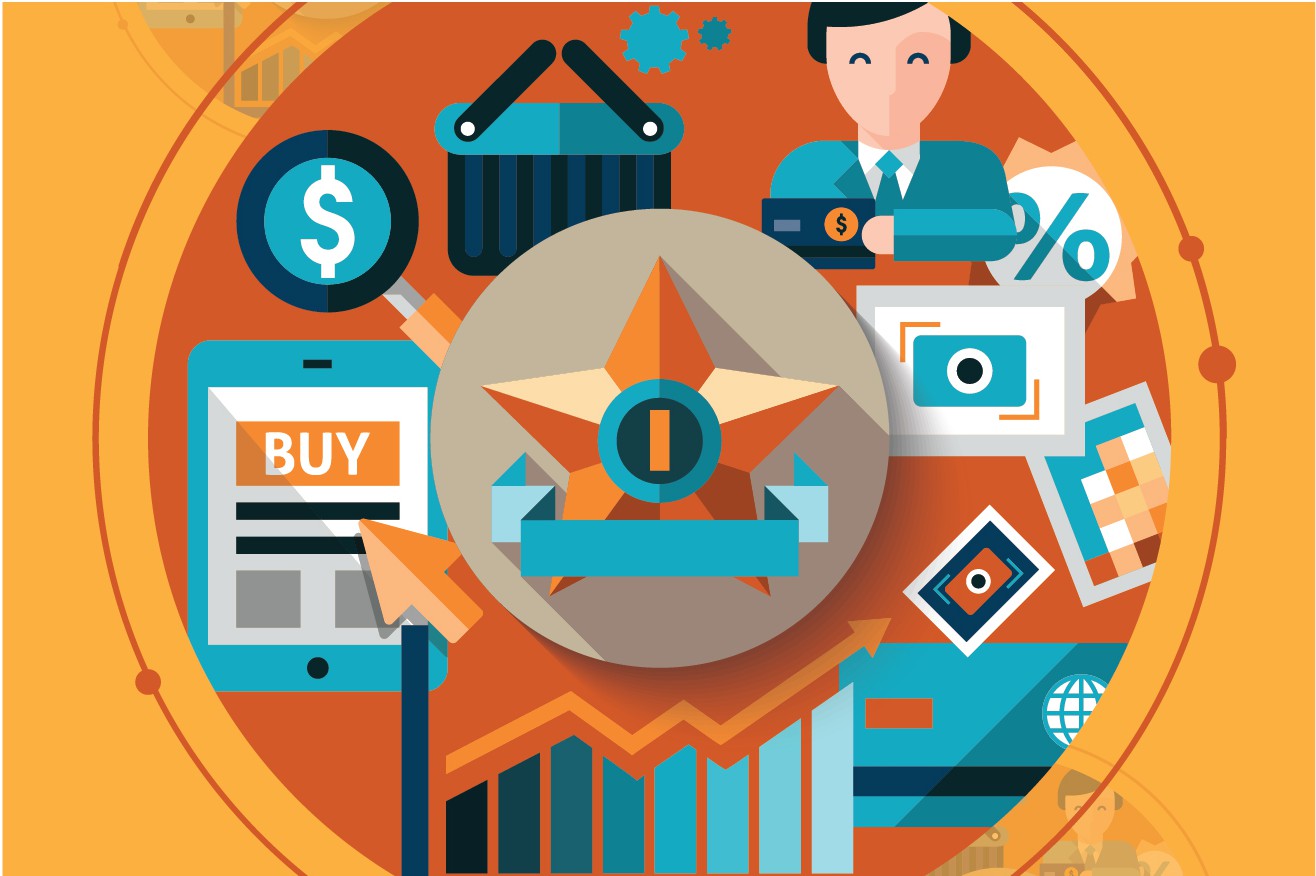 With almost every line of property/casualty insurance seeing declines in pricing due to the low number of catastrophes, insurance buyers once again have an edge in 2016. Those purchasing cyber insurance, however, may see savings evaporate, as prices have jumped 25% or more.

“Property has been very competitive for a couple of years now and we think pricing will continue to decline as long as there is not a major catastrophe,” said Jasper Cooper, assistant vice president and analyst at Moody’s Investors Service. “So far there has been more competition for large commercial property exposures and a little less for smaller properties. We’re seeing the rates drop even for those clients with catastrophic exposure.” 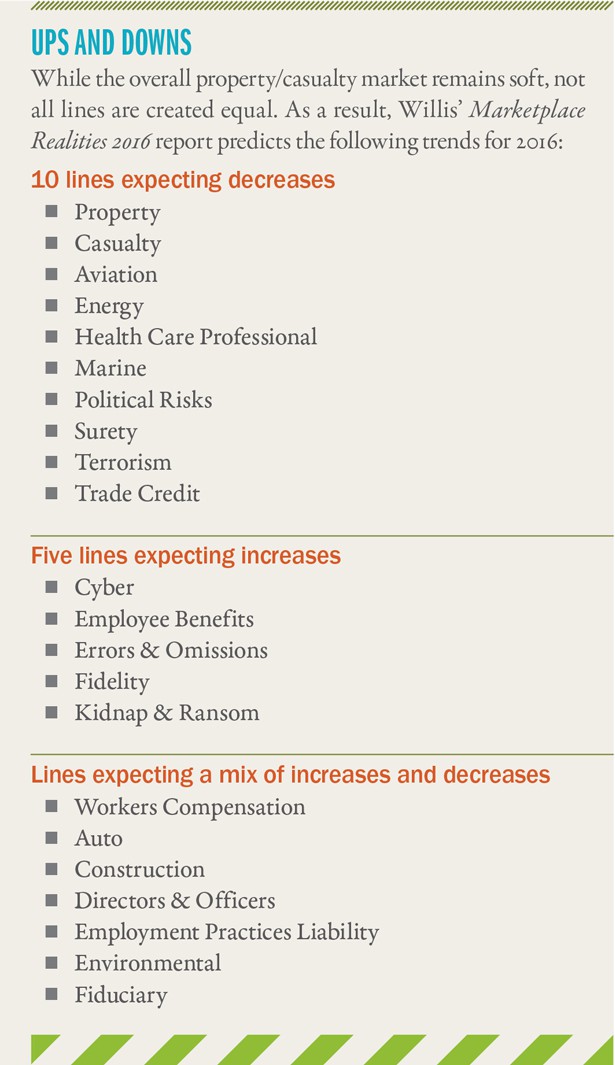 Other experts agree. Christopher Lang, Marsh’s U.S. placement leader, observed that property coverage is very competitive, noting that he expects the U.S. market to see single-digit decreases of 5% to 7.5%. He is also seeing a tremendous amount of M&A activity, which can mean additional savings. “Two companies getting together usually means an ultimate savings,” he said. “Instead of two property or two casualty programs, they will now purchase one big program.”

Directors and officers and errors and omissions lines are also flatter than in previous years. While mergers increase the likelihood of a D&O lawsuit being filed, that doesn’t seem to be impacting D&O rates. “Despite more M&As being announced, we haven’t seen a spike,” he said.

On the casualty side, Cooper said 2015 was the fifth straight year of price increases but that rates are expected to drop in 2016. “The reality is that prices are increasing slightly, but at a rate less than loss cost trends. One way to look at that is that pricing has increased, but at a rate that is lower than inflation,” he said,

While overall there are very few signs of rate increases, MarketScout CEO Richard Kerr observed that, “The only coverage with seemingly steady rate increases is cyber liability. Underwriters don’t have a lot of data to use for pricing cyber so we expect pricing to be inconsistent in the near term.” In its Marketplace Realities 2016 report, Willis noted that the cost of point-of-sale cyber coverage now ranges from plus-10% to as high as 150% above last year’s rates.

Despite increasing reports of hacking and data breach incidents, most companies are not yet buying cyber insurance, but that is starting to change. “We are seeing a significant increase,” Lang said. “Buyers are seeing savings in their casualty, property and financial lines programs, and perhaps using those savings to put a cyber program in place or expand their current coverage and not go over budget.”

Some risk managers are purchasing higher limits at increased rates and others are taking higher deductibles. “There is not a broad penetration of buyers in the market, so those that are buying are paying about 15% or more for the cover,” he said.

According to Advisen’s Cyber Liability Insurance Market Trends survey of primary insurers and brokers, the cyber insurance marketplace has grown to more than $2 billion in gross written premiums and is expected to double by 2020. The number of carriers entering the market has also increased, following a spate of cyberattacks that have repeatedly illustrated the potential and need for such insurance. “These events have demonstrated that no one is immune to cyberrisk—a term which continues to be shaped, debated and defined by each new cyberattack and subsequent testing of current policy language,” the report stated.

Therein lies the current dilemma, Advisen said. While the demand for cyber insurance products is skyrocketing, “the industry’s attempt to understand a consumer’s cyberrisk profile and to profitably underwrite an insurance program is currently causing some confusion.” According to survey respondents, the cyber insurance market is “disjointed and muddled by an often complicated application process as well as inconsistent policy forms and pricing.”

As a result, many are still debating how to manage cyberrisk exposures. “Not all have decided that a cyber policy is the best way to mitigate that risk,” Lang said. “They have internal policies and procedures, firewalls and their own systems, and they feel they have mitigated the risk such that they don’t think they need to buy an insurance policy.”

Mike Turner, executive vice president at FM Global, agreed that businesses are looking for more coverage and capacity, but confusion exists. “Buyers are trying to find practical cyber solutions, however, a lot of what is going on out there is a bit too complex, from an insurance point of view, as far as understanding the exposure and the coverage,” he said.

While a number of different types of cyber policies exist, he said, “from what we understand, a lot of buyers aren’t sure that is doing the job for them—there is still the issue of understanding the exposure, so we are spending time helping them understand what they can do to secure themselves and also protect data.”

The Elephant in the Room

With the significant amount of capacity now available, some buyers are starting to look at extending contracts to lock in prices. “We’re seeing a lot of requests for two- and three-year policies,” Turner said. “I would say this is a good time to do that. Whether they can, though, depends on the loss history and the quality of the account and the terms and conditions.”

Others are holding off in the belief that pricing could sink even lower. “Some buyers have a different perspective in whether they want to commit to a multi-year program in a declining environment,” Lang noted. “Absent a significant catastrophic event or some other financial hit in the marketplace, we do know that the carriers have the capacity, they have the surplus and their balance sheets are strong, so we expect there will be a continued amount of competition in the marketplace.”

Just how long this trend will last, however, depends largely on catastrophes, both man-made and natural. According to Fitch, “Factors that promote future movement towards a negative industry outlook include: large events that significantly affect the industry’s capital position such as a large natural catastrophe, discovery of adverse claims experience and reserve deficiencies, and a sharp equity market downturn. Shifts in underwriting trends that led to prolonged underwriting losses for insurers could also lead to consideration of negative sector outlooks.”

With 11 named storms, including four hurricanes, 2015 was the third consecutive below-average Atlantic hurricane season, which was indicative of the relatively mild natural catastrophe loss year around the world. While large losses did occur, many happened in areas with low insurance penetration. For example, devastating earthquakes in Nepal claimed 9,000 lives and caused $6 billion in economic damages, but only $160 million of that was insured.

But with many experts fearing that climate change and warming temperatures could lead to an increased number and severity of extreme weather events, there is no guarantee that the recent lull in natural catastrophe insurance losses will continue. Should the trend reverse, the insurance pricing picture will likely change dramatically. For now, however, insurance buyers should be able to continue enjoying a favorable market.