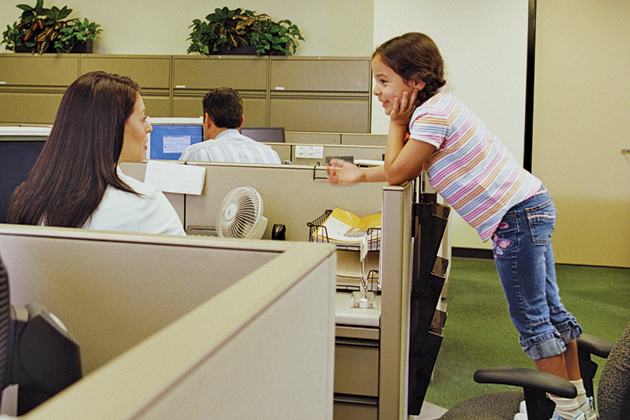 As a budding curmudgeon, it probably comes as no surprise that I have mixed feelings when it comes to children in the workplace. It usually comes down to how much I have to do that day, how cranky I feel, and whether the child in question is a sweet, little angel or a feral beast sent from the underworld specifically to torment me. (Of course, this doesn’t apply to the offspring of any of my co-workers who might be reading this—all of your kids are adorable. Obviously.)

There are positive aspects to bringing children to work. It fosters the family-friendly environment that many companies strive for and promotes a healthy work-life balance. According to the Take Our Daughters and Sons to Work Foundation, it is more than just glorified babysitting. As they put it, “showing them the value of their education, helping them discover the power and possibilities associated with a balanced work and family life, providing them an opportunity to share how they envision the future, and allowing them to begin steps toward their end goals in a hands-on and interactive environment is key to their achieving success.”

That said, there are risks. Some of these issues were highlighted during this year’s baseball preseason, when Chicago White Sox first baseman Adam LaRoche opted to retire from the game after team management asked him not to bring his 14-year-old son Drake to the clubhouse every day. What made his decision even more noteworthy is that it also meant giving up a $13 million contract. This is clearly a man who values family above finances. (It is worth pointing out, however, that LaRoche made more than $71 million over his 12-year career, so he’s not exactly hurting for money to begin with.)

While it may seem reasonable for an employer to dictate the conditions of their work environment, the situation did not sit well with some of LaRoche’s teammates. Outfielder Adam Eaton lamented, “We lost a leader in Drake,” while pitcher Chris Sale called team president Kenny Williams a liar for suggesting that player complaints motivated the mandate to limit Drake’s visits.

Hurt feelings and hyperbole aside, the team likely had good reasons for making the request that, perhaps, were not communicated very effectively. Maybe it really was because of complaints, or maybe it was a shift in team policy, or because the team finished fourth in their division last year and needed fewer distractions. But it likely wasn’t personal. “We all think his kid is a great young man,” Williams said. “I just felt it should not be every day, that’s all. You tell me: Where in this country can you bring your child to work every day?”

Other teams face similar concerns with children in clubhouses and locker rooms, and while many try to be accommodating, they also have policies that stipulate when and where children can go, often requiring that they must leave at a certain point before a game so players can prepare. There are also insurance issues to consider. “If you’re not employed and you’re not entering as a ticketed fan and you’re in secure areas where there’s no coverage for you if an injury occurs or something else happens, there’s a lot of liability,” said New York Yankees General Manager Brian Cashman in the New York Post. “Anybody that runs a workplace environment would understand that.”

What the LaRoche situation demonstrates, however, is that even the most logical business decisions can backfire if those who are affected don’t understand or agree with the rationale. Communication and clear policies can help to avoid alienating your workforce, but sometimes you have to do what you think is right for the organization, recognize that you can never please everyone and embrace your inner curmudgeon.