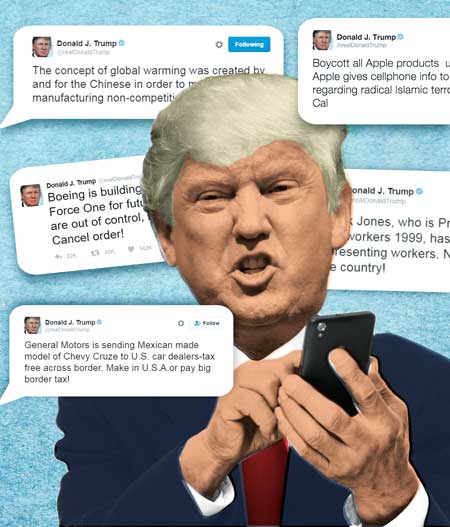 As I write this, it is only days before Donald Trump’s inauguration as the 45th president of the United States. Depending on your political bent, this is either cause for celebration or the beginning of the apocalypse—like any political opinion these days, there seems to be no middle ground or grey area when it comes to one’s feelings about the new president. What is certain, however, is that changes are coming that could have profound effects on the United States and the world. Health care, environmental and financial regulations are on the chopping block, while economic, national security and immigration policies are likely to be reconfigured and reprioritized. The hope is that these changes will prove beneficial for the country, but skepticism and uncertainty in the face of such widespread policy shifts understandably remain.

Adding to this unease, particularly for the business world, is Donald Trump’s relationship with Twitter. Throughout his campaign and in the weeks leading up to his inauguration, he has demonstrated a willingness to call out critics, drop hints about future policy directions and shame specific companies that are not performing to his expectations, all via tweet. While many companies are optimistic about their prospects with a pro-business president in office, those that have been caught in the crosshairs of his unpredictable Twitter outrage are probably a little less enthusiastic.

Boeing and Lockheed Martin, for example, saw their stock prices take a temporary dive, shaving billions of dollars off of their market value, after Trump criticized the costs of the Air Force One and F-35 fighter jet programs. Companies like Ford, GM, Toyota, BMW, Sprint and Carrier have also found themselves in either a positive or negative spotlight after Trump tweeted about their decisions to move jobs or products into or out of the United States. But regardless of whether a company receives praise or condemnation, the fact that an unanticipated tweet from the president could affect a company’s stock value or its overall reputation adds another level of risk to a company’s portfolio.

This possibility has not gone unnoticed. During this year’s CES tradeshow for the consumer electronics industry, CNN reported that some tech executives have developed plans to respond to possible Trump tweets about their company, including subscribing to Trump Twitter alerts and adjusting the schedules of public relations staff so that someone is available in case an early morning tweet from the president threatens the company’s stock prices. Considering that Trump has already been critical of some of the business practices of Apple, Amazon and others in the tech sector, it would seem wise for Silicon Valley companies to prepare any way they can.

To that end, the app Trigger, which sends alerts to a user’s mobile device about a specified company’s stock market activity, recently added a “Trump Trigger” that will send notifications to users when the president tweets about a publicly-traded company. It quickly became the most popular feature on the app. Hedge funds and Wall Street investors reportedly have already been using analytical tools and algorithms of their own to similarly anticipate the stock impact of a Trump tweet.

Like it or not, Donald Trump has mastered the use of social media as a means to get his unfiltered message out to the public. It is a strategy that obviously served him well in the campaign and is likely to continue in his presidency. The difference is that his comments will now carry infinitely more weight and companies will therefore need to adjust their strategies accordingly to avoid the unprecedented risk of winding up in the path of a presidential tweetstorm.