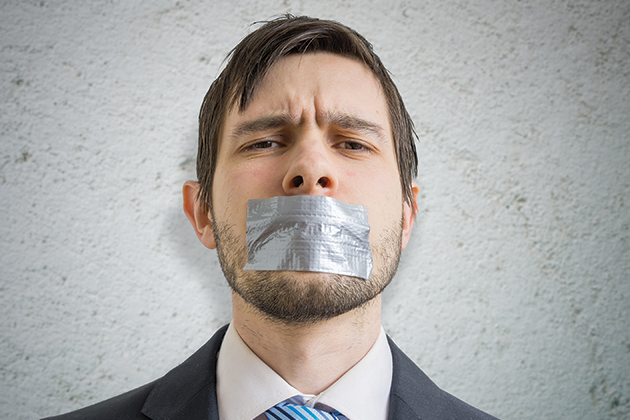 When I first started at Risk Management, my editor in chief had a running list posted on his office wall of words and phrases that we were forbidden to use in the publication. These weren’t expletives like George Carlin’s infamous seven dirty words, but rather the buzzwords and jargon that seemed to pop up all too often in articles submitted for review. Terms like “synergy,” “outside the box,” and “thought leader” all made the list because they were either overused, unnecessarily elaborate or just simply annoying.

The idea behind the ban was that we were tired of seeing prose that was so desperate to sound significant that it ended up saying nothing. Sure, we could take this discussion offline and circle back when you have the bandwidth to interface about the action items for disruptive innovations that will shift the paradigm, but wouldn’t it be easier if we just talked about new product development at some point?

The Creative Group, a staffing agency for marketing and creative professionals, recently asked 400 advertising and marketing executives to list the most overused and annoying buzzwords. The responses covered a lot of the usual suspects that made the office wall like “synergy” and “out of the box,” as well as the equally noxious “out of pocket,” “leverage” and “ideation.” They also mentioned trite sayings like “take it to the next level” and “it is what it is.” Even relatively harmless words like “amazing” and “innovative” made the list, likely because these adjectives have been used so frequently that they have lost all meaning. After all, if everything is amazing, then logically nothing is really amazing. I guess it is what it is.

Even some of history’s greatest writers have cautioned against the use of excessively flowery language. Thomas Jefferson once said, “The most valuable of all talents is that of never using two words when one will do.” George Orwell echoed this, writing, “Never use a long word where a short one will do” and “Never use a foreign phrase, a scientific word, or a jargon word if you can think of an everyday English equivalent.” William Strunk and E.B. White, the authors of The Elements of Style, a book widely considered to be the authority on English composition, also advised, “Do not overwrite” and “Avoid fancy words.”

So why all the hatred for these terms? If we strip all of our writing down to its monosyllabic essence, won’t we just be left with the business world’s version of The Cat in the Hat? Shouldn’t business writing and communication be more sophisticated than a children’s book?

The problem is that buzzwords fail to accomplish what should be their core purpose: to clearly communicate to the audience. This is obviously a problem because communication is only effective if it accurately conveys the intended message. Instead, buzzwords emphasize style over substance and, like the emperor’s new clothes of communication, they obscure the possibility that there might not be any tangible ideas behind the message in the first place. This hollow ambiguity fools people into believing something useful has been accomplished and encourages leaders to make poor decisions based on inaccurate information and unclear objectives.

William Faulkner and, later, Stephen King famously advised writers to “kill your darlings,” or do away with the excess verbiage, no matter how much you might like a particular turn of phrase. The same concept applies to the use of buzzwords. By putting these darlings of business communication out of their misery, we can concentrate on real ideas rather than packaging. We may no longer be able to “take our business to the next level,” but we will be able to “achieve greater success.” And isn’t that what we really wanted the whole time?