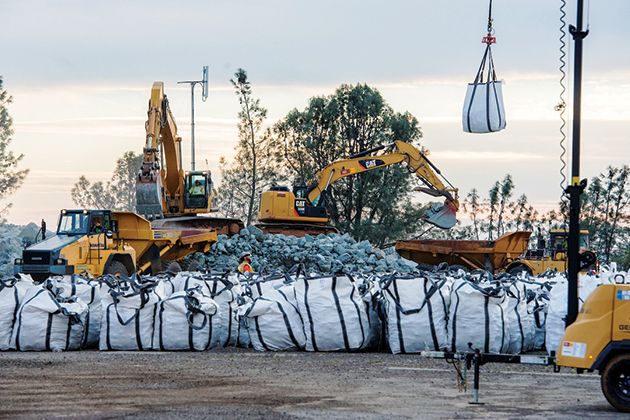 The near-collapse of the Oroville Dam in northern California in February could have been catastrophic. Communities as far as 100 miles downstream from the dam were at risk of flooding that could have resulted in $21.8 billion in structural damages, according to Risk Management Solutions. What’s more, a bad situation would have been made worse by the fact that many of the properties near the dam were uninsured. Thankfully, this did not happen.

Problems at the Oroville Dam began when the dam’s main water channel, or sluice, was damaged after a winter season of record rain and snowfall, following five years of drought. Torrential rainfall caused water levels to rise so quickly that large amounts needed to be released to prevent the dam from rupturing and sending a wall of water to the communities below.

But when the force of the cascading water created a large hole in the main spillway, the emergency spillway was required. This safety backup, however, also nearly failed because the dirt spillway, which had never been fortified by concrete, began to erode, increasing the risk of damage to the dam. In anticipation of a possible disaster, almost 200,000 residents living in the shadow of the dam were temporarily evacuated.

Fortunately, the crisis subsided after the California Department of Water Resources (DWR) was able to repair the main spillway by plugging the hole with large bags of rocks dropped by helicopter.

According to Rep. John Garamendi (D-Calif.), whose constituents include 150,000 of the evacuees, although there were many factors in the dam’s near-failure, the situation was made worse by changing weather patterns thought to result from climate change.

Increasingly warmer weather has been melting the snowpack in the mountains and affecting the flow of the rivers that feed the dam. “The biggest reservoir in California—the snowpack—is getting smaller,” Garamendi said. The warmer weather also means that precipitation that previously might have been snow that would melt in May or June is now falling as rain. These changes in precipitation alter the volume, movement, and quality of the river water, putting increased pressure on the dam. Adding to the situation is the Pineapple Express—warm storms emanating from the southwestern Pacific Ocean that are now occurring in non-El Niño years.

Changing weather patterns have highlighted inadequacies in the system used to determine how much water is stored and how much is released from the reservoir. These operations are determined by a manual put together by the Army Corps of Engineers, which is responsible for the reservoir’s flood management. The system used is based on historic averages of a river’s hydrology, but it needs to be changed.

“We’re seeing that the operational manual is not pertinent to the new circumstances of climate change,” Garamendi said. “We’ve known this for some time.”

Anticipating the need for a change, engineers began a process 10 years ago to develop a new algorithm for the American River, which flows from the Sierra Nevada Mountain Range to the Sacramento River, eventually finding its way to the Oroville Dam. The system uses real-time monitoring from satellite imaging, checking the soil’s capacity for water and locating snow. The data is proving useful in anticipating problems, thereby improving flood safety and the storage capacity of the reservoir. “For example, while the historic model may say that, on April 1, the reservoir should be at a certain level based on the amount of snow on the Sierra Nevadas, it may be that warm temperatures cause the snow to melt quickly and therefore maybe we ought to have more flood capacity. Or maybe the snow is not there at all, so we don’t need flood capacity,” he explained.

Hopefully, changes are on the way. “We’ve introduced legislation in Washington to change the law and authorize the Corps of Engineers to do this by real-time (rather than historic) monitoring,” Garamendi said.

The Oroville Dam crisis underscores the risks present in the nation’s aging infrastructure. Why did the spillway fail? Why didn’t the emergency spillway work in an emergency? “While these questions are profoundly important to this dam, the same questions must be asked of every other reservoir and dam in the state,” Garamendi said, noting that there are more than 1,400 dams in California alone. While those dams vary in size, most are upstream from a significant city or community, making structural integrity even more important.

This a national problem as well. There are 94,580 dams around the country, many of which are starting to show their age. In its recent 2017 Report Card for America’s Infrastructure, the American Society of Civil Engineers (ASCE) gave dams in the United States a grade “D,” or “poor.” The average age of these structures is 56 years old, and many that were built 50 years ago used less stringent criteria because of the lack of development below the dam. As scientific and engineering data have improved, however, experts anticipate that many dams will not safely withstand current earthquake and flood predictions, according to the report.

The Association of State Dam Safety Officials estimates it would require about $22 billion to repair just the country’s high-hazard dams.

Often it is a question of economics and political will. For example, in 2005, the environmental groups Friends of the River and Sierra Club issued a report questioning the viability of the Oroville Dam’s earthen emergency spillway. “The upgrade would have cost millions of ­dollars and no one wanted to foot the bill,” Ronald Stork, senior policy advocate for Friends of the River, told the Washington Post.

Garamendi agreed that the underlying issue is funding for upkeep and repairs. In the case of the Oroville Dam, “it will probably be a couple-hundred million dollar repair job, and that’s just one dam,” he said. “The old ‘penny-wise, pound-foolish’ adage certainly applies here.”

According to the ASCE Report Card, California’s budget for dam safety is $11.14 million. But whatever the cost of repairs, lives are at stake and action needs to be taken.

“The situation in Oroville should remind us all of the importance of investing in our infrastructure, whether that is roads, bridges or dams,” Garamendi said. “It is beyond question that investments in our infrastructure will create jobs, strengthen our economy, and make our nation healthier and safer. It’s time for both Congress and the President to step up to the plate and invest significantly in rebuilding America.”

The Challenges of Hurricane Forecasting